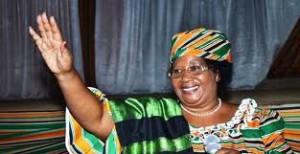 Malawian President, Joyce Banda has announced the annulment of this week’s general election which she is losing to opposition. She said that the election is being annulled “because of voting “irregularities,” even as the electoral chief, Maxon Mbendera, insisted that there were no serious irregularities to warrant such Presidential action.

President Banda, who said that the election was marred by rigging, multiple voting and computer-hacking fixed new election to be held within 90 days, even as she said that she would not stand again in the new poll.

However, the head of the electoral commission said the president did not have the power to annul the vote.

Malawi’s election was chaotic, with one BBC correspondent reporting people voting two days after the Election Day because of delays in distributing polling material.

Frustrated voters set one polling station alight and smashed election material at another.

In some places, voting boxes or lids did not arrive so officials used buckets and plastic wrap.

The head of the Malawi Electoral Commission (MEC) said despite problems involving the electronic count, the poll remained valid and vote-counting would go on.

Late on Friday, MEC said Joyce Banda’s rival candidate, Peter Mutharika had taken a lead with 42%, while President Banda got 23%.

Today, announced: “I am nullifying the elections, using the powers invested in me by the Malawi constitution.”

She told newsmen: “I want to give Malawians an opportunity to choose a candidate of their choice in a free and fair manner. When elections are to be held again, I will be stepping aside.”

Mrs. Banda had previously accused a party, which she did not name, of infiltrating and hacking MEC’s counting system even as the MEC chairman denied that its system had been hacked.

In a previous statement about the elections, President Banda had said that there were irregularities, included the arrest of presiding officers who were “caught in the act of rigging and some people voting up to three times. There were also “serious anomalies” where some candidates won more votes than the number of registered voters.

About 7.5 million people were eligible to vote in the fifth elections since the end of one-party rule 20 years ago. This is the first time that Malawi held presidential, parliamentary and local elections on the same day