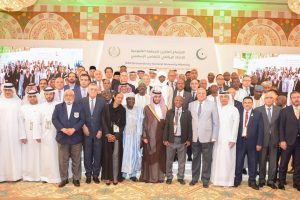 Prince Abdul Aziz bin Turki Al Faisal, who was elected today, Monday, at the General Assembly of the organization in Jeddah, Saudi Arabia, by delegates from 57 Muslim Countries, promised that he would exhaust his energy in promoting ISSF’s activities within Muslim countries.

“We will combine our efforts to improve the value of Sports for the achievement of our goals and objectives.

He stressed the need for ISSF to be active, effective and charismatic in its approach and in its programs and tournaments.

The new leader said that he will restructure the body for the purpose of improving its international sport outings, saying that enough financial resources would be provided for the purpose.

He made it clear that besides forging partnership that he would seek after with specialized centres, efforts would be intensified to qualify talented youth through productive creativity.

“We in ISSF will work strongly in enhancing tolerance, moderation and creation of peaceful co existence among the youth of Umma.”

Prince Abdul Aziz bin Turki Al Faisal who will hold the presidency of ISSF till l 2021, is also the president of Saudi Sport Authority. He replaced Turki Al-Sheikh who resigned recently.

It is also responsible for organizing tournaments and championships among (OIC) member states’ sporting teams.

It was established in 1985 with its permanent headquarters in Riyadh, capital of Saudi Arabia and it is actively engaged in preparation for the 5th Islamic Solidarity Games which will be held in 2021, in Istanbul,Turkey.