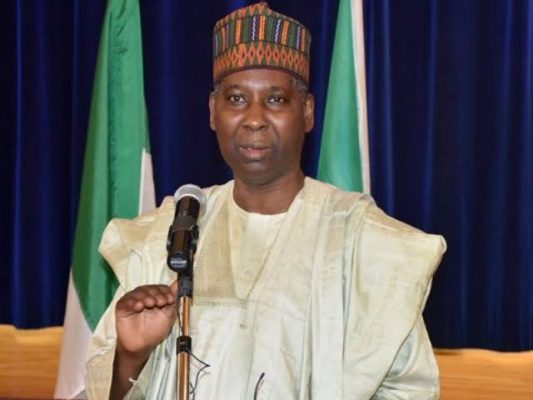 The newly elected President of the United Nations General Assembly, Professor Tijani Mohammad-Bande, has given details of his priority areas even as he secured the support of world leaders.

Professor Tijani Mohammad-Bande, who was elected today at the 87th plenary meeting of UNGA in New York,pledged to provide a vibrant and purposeful leadership anchored on accountability and transparency.

“As I announced in my mission statement and during the interactive dialogue on May 13, the implementation of existing mandates and the 2030 agenda with particular focus peace and security, poverty eradication, zero hunger, quality education, climate action and inclusion will constitute the major priority of my presidency.

“I am committed to promote partnerships that are needed from all stakeholders to achieve our objectives, and ultimately ensure that we do our best to ensure peace and prosperity, particularly for the most vulnerable.

This was even as the UN Secretary General, António Guterres, assured Professor Tijani Mohammad-Bande, of his support to actualize his vision

“It is my pleasure to congratulate Prof. Tijani Mohammad-Bande as President of the 74th session of the United Nations General Assembly.

“Prof Bande, you bring many important and remarkable qualifications to the job. From your years as Permanent Representative of Nigeria, you know the United Nations well.

“And from your wide ranging academic pursuit; you are an expert in political science and public administration.

“And as a Nigerian and an African, you have invaluable insight into the continent’s challenges such as the Sahel and the Lake Chad basin, and more broadly to the challenges our world faces across the six pillars of our work – peace, sustainable development and human rights.

“We wish you well in your preparations for this role in the months ahead.

“Mr. President-elect, we all look forward to working with you and you can count on my support, as we strive to reach our shared goals and uphold universal values.’’

In her remarks, outgoing President of the 73rd Assembly, Ms Maria Espinosa, also congratulated Mohammad-Bande, describing him as the man for the job.

“Amb. Tijani’s career and experience both as a scholar and a diplomat should serve him and the General Assembly well in a session that promises to be pivotal.

“Amb. Bande is well seasoned to provide the strong and creative leadership our august assembly requires as he positions himself to be relevant in a world in rapid change.

“Your presidency, Ambassador, comes at a very critical moment for the United Nations and multilateralism.

“I am confident, however, that under your able leadership we will make meaningful progress to advance the implementation of 2030 agenda for sustainable development, in sustaining peace and conflict prevention as well as the promotion of human rights and the empowerment of women and girls.’’

She assured the president-elect of her commitment to a smooth transition in September.

In his acceptance speech, Muhammad-Bande thanked the Federal Government for nominating him for the position, and the African Group in the Assembly for endorsing his candidacy.