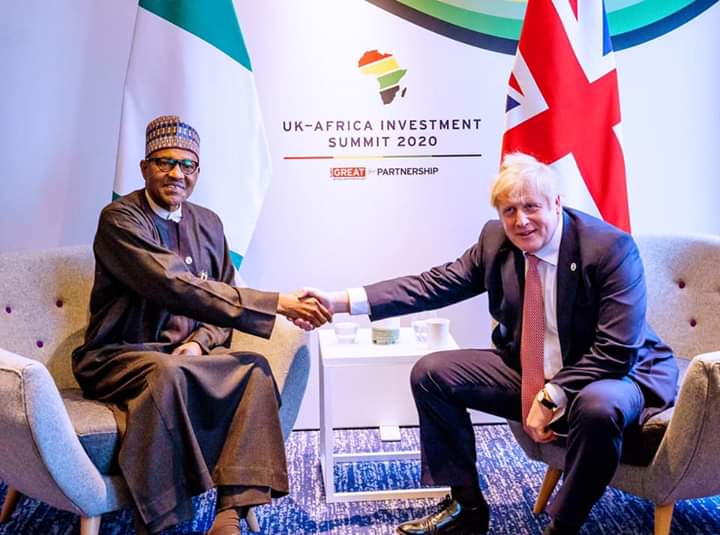 The British Prime Minister, Boris Johnson has predicted that Nigeria will become world power in no distant future with the way the government of President Muhammadu Buhari is carrying on with the development of the country.
Boris Johnson, who met with President Buhari on the sidelines of the UK-Africa Investment Summit 2020 today, January 20 in London, said: “In the future, Nigeria will not just be a continental but international power.”
The Prime Minister applauded the idea of the Commonwealth Free Trade, as being proposed by President Buhari and pledged a careful consideration.
He advised the Nigerian Leader to keep the national autonomy of his country intact.
This was even as President Buhari narrated the strides which his government has made in agriculture, leading almost to self-sufficiency in rice and other grains, saving the country billions in foreign exchange.
He also spoke about the war against insurgency, which he said is being won, even as he disabused of the minds of the people on the true philosophy of Boko Haram.
He acknowledged that the the main challenge in the insurgency war is in the area of resettling displaced people, which is being tackled frontally.
“We have a long history with the British military, and we are collaborating.”
President Buhari also spoke on the anti-corruption war, saying that though it has been slow but painstaking.
He said that the cooperation of the National Crime Agency of UK is still needed, particularly in the investigation of fugitives from Nigeria finding accommodation in the United Kingdom.
Climate change, President Buhari said, was a challenge to Nigeria and neighbouring African countries, especially with the shrinkage of the Lake Chad to a minuscule of its original size.
The Nigerian Leader also said the country is focused and making progress on education, particularly that of the girl child.