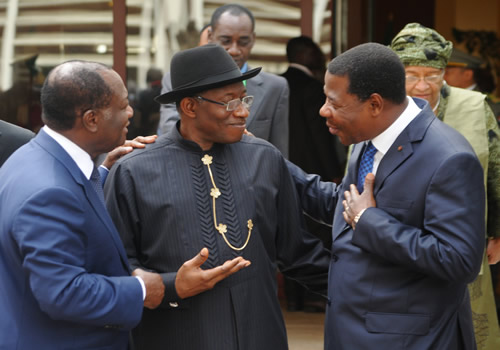 Heads of Governments under the umbrella of Economic Community Of West Africa (ECOWA) took turn today, at the 47th Ordinary Session of the Authority in Accra, Ghana praise President Goodluck Jonathan for the peaceful and successful conduct of the last general elections in Nigeria, saying his prompt concession of defeat, President has placed him in a special place of history of Nigeria’s democracy.
Chairman of the Authority of Heads of State and Government of ECOWAS and president of Ghana, John Mahama Dramani, fired the first shot of praise as he declared the 47th Ordinary Session of the Authority open.
Jonathan said he was commending Jonathan on behalf of the sub-regional body for his mature statesmanship, even as he congratulated General Muhammadu Buhari for his victory at the March 28 presidential election.
He observed that the success of the Nigerian election as well as that of Togo, has sent a strong message to the world that the ECOWAS protocol on democracy and good governance is working.
“At our last summit, I informed you that five member states of our sub-region would hold election this year. We are extremely proud of the elections held so far in two of our member states.
“I salute the people of Nigeria and Togo for the peaceful elections held in those countries. This sends a strong message to the world that our protocol on democracy and good governance is effective and has strengthened the rule of law in our sub-region.
“Let me on your behalf take this opportunity to highly commend our brother, President Goodluck Ebele Jonathan for his personal show of mature statesmanship in the event that followed the presidential election held in Nigeria.
“I believe his name will be recorded in a special place when the history of Nigeria’s democracy comes to be written.
“Let me also on this occasion salute General Muhammadu Buhari for his victory in the presidential election.”
President Dramani noted the progress recorded in the fight against Boko Haram whose atrocities he said was unsurpassed anywhere in the world.
He regretted that Chibok girls have remained in the custody of the insurgents despite the rescue of over 1,000 people so far.
“Last year, Nigeria and Cameroon were caught in the spate of terrible attacks and atrocities by the terrorist group, Boko Haram. They freely attacked with impunity and abducted hundreds of women and children.
“The atrocities of this group have remained unsurpassed by any terrorist group anywhere in the world. Slaughters, beheading, rape, torture, abductions, bombings, looting and destruction of property have been the hallmark of this terrorist group.
“People, especially of north east Nigeria, have been subjected to a reign of terror.
“Today, thanks to the African Union and the multinational Joint Task Force formed by the Lake Chad Basin countries, a lot of progress has been made in the fight against Boko Haram.
“We are pleased to note the success in liberating the territories that Boko Haram dominated and the release of over 1000 people mostly women and children.
“The fight is however far from over. We have not yet secured the release of the young Chibok girls and Boko Haram has shown that it still has the capacity to counter attack.”
The Ghanaian president thanked the leadership of the Economic Community of the Central African States (ECAS) for their support and contribution to the fight against Boko Haram even as he looked forward to the proposed joint summit of ECOWAS and ECAS to formulate a joint plan for defeating and eventually eliminating the insurgents’ threat.
In a message by the Secretary General, Ban Ki Moon, read by his Special Representative, Muhammed Ibn Chambas, he also praised Jonathan for his contributions to regional peace and security.
“As this marks the final summit of President Goodluck Jonathan, I wish to send our sincere appreciation for his valuable contributions to regional integration, maintenance of peace and security in a West Africa, most notably in Côte d’Ivoire, Guinea and Mali.”
The UN Scribe also commended the smooth conduct of general elections in Nigeria and Togo with the close cooperation of ECOWAS.
He recognised the joint effort of Nigeria, Niger, Chad and Cameroon in the fight against Boko Haram, and paid tribute to the soldiers that lost their lives and expressed the world body’s deepest condolences to their families.
In his address, the President of the ECOWAS Commission, Kadre Desire Ouedraogo, commended the credibility Nigeria has brought to ECOWAS with the just concluded general election.
He said that the Commission would never forget the contributions of President Jonathan to the management and resolution of crises in West Africa.
“In that respect, I think firstly, of the increased credibility that ECOWAS has received due to the conduct of the presidential election in Nigeria and the manner in which it was concluded.
“We owe this to the choices made by two main players: President Goodkuck Ebele Jonathan and General Muhammadu Buhari to place the general interest of the country above theirs.
“In joining the well deserved tribute paid by the current chairman to the presidents and the Nigerian people, I also wish to express to them my very best wishes and sincere gratitude for the interest and attention they have paid to the recommendations made by our organization during the electoral process.
“In speaking particularly to His Excellency, President Goodluck Ebele Jonathan, I wish to assure him that the commission will never forget his crucial contribution in the management and resolution of crises in Guinea Bissau, Mali, and Burkina Faso as well as in the fight against the Ebola virus disease among other challenging matters.
“I am confident that nothing will come to make us forget the great pride Nigeria has brought us only a few weeks ago.”
Present at the meeting were the leaders of Ghana, Togo, Nigeria, Niger Republic, Burkina Faso, Liberia, Cote d’Ivoire, Mali, Sierra Leone, Senegal, Gambia, Cape Verde, Guinea, Guinea Bissau, and Republic of Benin.