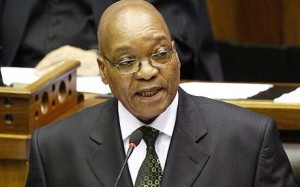 President Jacob Zuma of South Africa was embarrassed today by members of the opposition lawmakers who disrupted his speech as he was addressing the parliament by shouting on him to pay back the sum of $23 Million the President allegedly embezzled.

President Zuma was responding to allegations that he had “unduly benefitted” from an upgrade to his private residence which cost taxpayers about $23m (£13.8m) when, after saying the matter would be handled by government, the opposition lawmakers from the new Economic Freedom Fighters (NFF) started chanting: “Pay back the money.”

Parliament had to be suspended while security personnel were called to oust the EFF group. Police entered parliament in Cape Town carrying riot shields, tear gas and batons but then aborted their plans to forcibly remove the EFF MPs.

The EFF has 25 MPs in the 400-member parliament elected in May after gaining six per cent of the national vote.

It was the first election contested by the EFF, led by controversial former youth leader, Julius Malema. He formed the EFF last year following his expulsion from the governing African National Congress in 2012.

A one-time ally of Zuma, he had been sacked after the pair fell out, with Mr. Malema calling for radical policies to ease poverty. The EFF often wear red workers’ overalls in parliament. [myad]