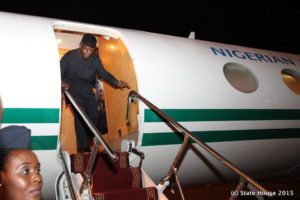 Nigeria’s Vice President, Yemi Osinbajo will leave the country for the North African country tomorrow on a 2-day official visit. He is being invited by the Algerian government.
A statement by the senior special assistant to the Vice President on media and publicity, Laolu Akande said that Osinbajo would be received by the Algerian Prime Minister, Abdelmalek Sellal and subsequently holds talks his host. He will also interact with members of the Upper and lower chambers of the Algerian legislature.
The statement said that the Vice President would use the visit to deepen diplomatic and economic relations between Nigeria and Algeria.

It said that both countries would also use the opportunity to harmonize their positions on multilateral issues of common interest, and sharing ideas on how to address a number of international challenges especially those confronting Africa.
It would be recalled that earlier in the year in August, the Algerian President sent a Special Envoy to Nigeria, in person of the country’s Foreign Affairs Minister, Ramtane Lamamra. The Special Envoy was then received in audience on behalf of President Muhammadu Buhari, by Vice President Osinbajo. The Special Envoy reiterated Algeria’s support for Nigeria’s fight against terrorism, calling for increased collaboration between both countries in the areas of intelligence gathering and deradicalisation programmes. [myad]