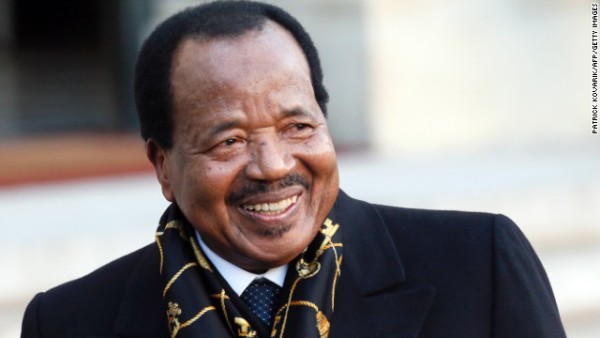 President Paul Biya of Cameroon has extended an invitation to President Muhammadu Buhari of Nigeria visit his country at his earliest convenience to continue with talks on how to intensify cooperation between Nigeria and neighbouring countries in the war against Boko Haram and terrorism.
Biya sent
The Cameroonian Minister of Territorial Administration and Decentralization, Mr. Sadi Rene Emmanuel, delivered the invitation message to President Buhari today at the Presidential Villa, Abuja.
In a statement by special adviser to the President on media and publicity, Femi Adesina said that President Buhri has accepted the invitation from Biya but would carry out the visit after the Ramadan fasting.
Receiving the message, President Buhari insisted on the greater regional and international cooperation to end the atrocities of the terrorist group.
The President vowed to put his experience as a former soldier to good use in the war against Boko Haram even as he commended the efforts of all regional governments, including Cameroon in support of Nigeria.
“I am happy that the President has sent you. As you must have observed, I was in Niger and Chad over this issue. I planned to be in Cameroon afterwards, but I received an invitation to attend the Group of Seven (G7) meeting in Germany.
“I had to attend the meeting because Boko Haram has been internationalized and it was part of the discussions there,” he told Mr. Emmanuel.
The Special Envoy assured President Buhari of President Biya’s “fraternity, sympathy and brotherly commitment” to working with Nigeria to end the Boko Haram insurgency.
“Together, we will reinforce our efforts,  eradicate the scourge of terrorism and look forward to better things.” [myad]