Home FOREIGN Residents Of Liberian Slum Clash With Soldiers Over Siting Of Ebola... 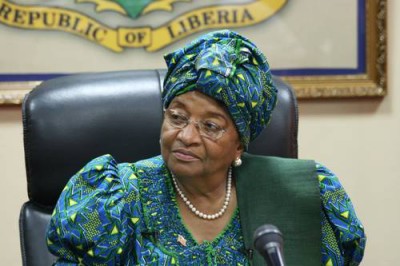 Riot broke out between soldiers and residents of a slum in the Liberian capital yesterday over quarantine of 50,000 Ebola Virus Disease victims in the area, with soldiers opening fire and spilling blood.
Report said that people ran in different directions screaming as soldiers from the country’s Ebola Task Force brutally enforced a quarantine of Monrovia’s West Point district, which was ordered by the country’s president last night.
As the violence erupted in Liberia, hundreds of miles away, a team of experts was meanwhile dispatched to a remote part of Congo where 10 people died after suffering Ebola like symptoms.
The chaos in Monrovia erupted after protesters surrounded the home of the West Point’s commissioner, Miatta Flowers, blaming her for the decision to turn their neighbourhood into an open-air isolation ward.
Soldiers carrying assault rifles lashed out at residents with telescopic truncheons and at least one man was shot as a security team moved in to evacuate Mrs. Flowers.
A resident of the West Point district said that security forces were firing into the air to disperse crowds who are angry over the quarantine measures.
Fear and tension have been building in Monrovia for days and West Point has been one of the flashpoints. Many residents feel the government has not done enough to protect them from the spread of Ebola.
Tensions came to a head over the weekend when a mob attacked and looted an Ebola screening centre, accusing officials of bringing sick people from all over Monrovia into their neighbourhood.
Dozens of people waiting to be screened fled in the chaos. Looters made off with items, including bloody sheets and mattresses that could further spread the virus.
In many areas of the capital, meanwhile, dead bodies are reported to have litter the streets for hours, sometimes days, even as residents asked that the corpses be picked up by health ministry workers wearing protective gear.
Earlier yesterday, riot police and soldiers sealed off West Point, a peninsula where the Mesurado River meets the Atlantic Ocean, with makeshift barricades built from piles of wood and barbed wire.
Few roads go into the area, and a major road runs along the base of the isthmus, serving as a barrier between the neighbourhood and the rest of Monrovia. Ferries to the area have been halted, and a coast guard boat was patrolling the waters around the peninsula.
At least 50,000 people live on the half-mile-long point, which is one of the poorest and most densely populated neighbourhoods of the capital.
Sanitation is poor even in the best of times, and defecation in the streets and beaches is a major problem. Mistrust of authorities is rampant and many people live without electricity or access to clean water. [myad]