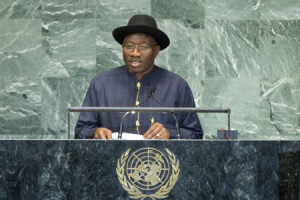 President Goodluck Jonathan of Nigeria has called on the world, especially the advanced nations, to respect the right of countries to the peaceful use of nuclear energy for development purposes.
“As a developing country, Nigeria needs to harness nuclear technology for socio-economic development.  It is for this reason we subscribe to the view that international and regional cooperation efforts should be based on the principle of maintaining a balance between nuclear non-proliferation obligations and the inalienable right of States to the peaceful uses of nuclear energy for development purposes.”
President who addressed
“While this is important, we would also like to draw attention to the need to maintain the highest standards of nuclear safety and security in establishing peaceful nuclear facilities,” the President said.
In his statement to the third global security summit which opened today in the city of Hague, the Netherlands, President Jonathan reaffirmed Nigeria’s full commitment to the global fight against the threat of nuclear terrorism, but said that Nigeria, under his leadership will continue to pursue efforts to harness nuclear energy and technology for socio-economic development.
He re-emphasised the commitment of Nigeria towards supporting all efforts against the proliferation of weapons of mass destruction, including nuclear weapons, even as he said that in keeping with Nigeria’s commitment to the non-proliferation of nuclear weapons and the peaceful use of nuclear technology, the Federal Government has submitted an executive bill to the National Assembly to accommodate the country’s obligations under international treaties on nuclear safety and security.
“Nigeria accords high priority to all global efforts towards ending the proliferation of weapons of mass destruction and their means of delivery, including nuclear weapons.  To this end, Nigeria has since the last Summit in Seoul, strengthened the legal framework for fighting terrorism through the adoption in 2013, of an amendment to its Terrorism (Prevention) Act, thus ensuring the implementation of more robust counter-terrorism measures in the country.
“Nigeria’s ratification of some international treaties and conventions in the realm of nuclear safety, security and safeguards has necessitated the review of the Nigerian Nuclear Regulatory Authority Act resulting in the recent decision of the Government to submit a new Bill to Parliament for consideration and passage into law in order to accommodate our obligations under these instruments.
“The instruments include the Convention on the Physical Protection of Nuclear Materials and its amended version of 2005, the International Convention for the Suppression of Acts of Nuclear Terrorism. The intention of the bill is to ensure the fulfilment of Nigeria’s international and national Nuclear Safety, Security, Safeguards and radiation protection obligations, by domesticating the international treaties.  The bill is presently awaiting passage by the National Assembly.
“Furthermore, as part of the outcome of the 2nd Nuclear Security Summit held in Seoul, South Korea in 2010, States Parties were urged on voluntary basis, to embark on the process of converting their reactors from the use of Highly Enriched Uranium to Lowly Enriched Uranium.  Consequently, Nigeria is working in collaboration with the United States of America and China for the conversion of Nigeria’s limited stock of Highly Enriched Uranium used in its research reactor to Lowly Enriched Uranium,” President Jonathan said.
He said that one of the main objectives of the Nuclear Security Summit is to reduce the amount of dangerous nuclear materials in the world by preventing materials that can be used to produce nuclear weapons from falling into the hands of terrorists and unauthorized non-state actors, adding that Nigeria supports the immediate commencement and early conclusion of negotiations on a “non-discriminatory, multi-lateral and internationally and effectively verifiable treaty banning the production of fissile materials for nuclear weapons”.
He commended the United Nations Secretary-General, Mr. Ban Ki Moon for establishing a Group of Governmental Experts which will begin work in Geneva next week on the proposal.
“Nigeria shares the view that fewer nuclear weapons translate into more nuclear security while at the same time reducing the risk of proliferation.
“But it is even more important that States as represented at this Summit demonstrate the necessary political will to embark on the path towards the ultimate goal of total and complete nuclear disarmament under strict and effective international control,” President Jonathan concluded.