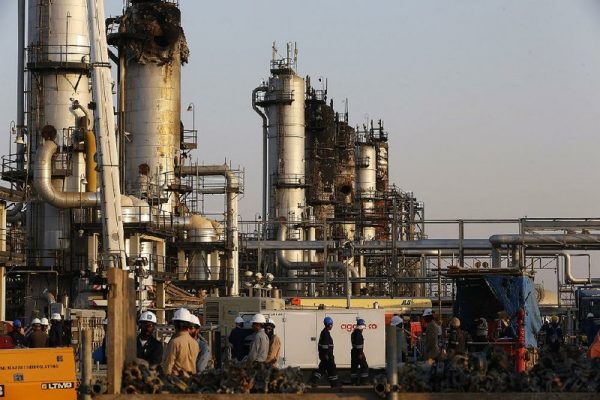 Saudi Arabia has bounced back after drone attacks fortnight ago, resuming oil production is full force.

The country’s Minister of energy, Prince Abdulaziz Bin Salman, who made the announcement today, October 4, said that the production was restored to levels seen before the attacks on the country’s key oil installations.

The September 14 attacks on Saudi Aramco’s key oil-processing facilities in Abqaiq and Khurais had temporarily interrupted the supply of an estimated 5.7 million barrels of crude oil per day — around five percent of global supply — and two billion cubic feet of gas.

The US Energy Information Administration estimates that Saudi Arabia was producing 9.9 million bpd of crude oil in August.

“By our agreement with OPEC+ we should have been producing 10.3 million barrels per day, we elected to voluntarily cut our oil production to lower level than that.”

OPEC and allied producers led by Russia, a group known as OPEC+, agreed last year to cut oil supply by 1.2 million barrels per day (bpd) to support prices. The cuts came into effect on January 1.

“I want to move on… we in the energy industry in Saudi Arabia, we have got a few challenges, we have got an IPO and we want to make sure it’s a successful IPO,” Prince Abdulaziz said.

Energy leaders from across the world have convened in Moscow for a week to discuss matters ranging from the global energy outlook to challenges in the development of renewable energy.

On the second day of the Russian Energy Week, a featured panel on maintaining energy connectivity in an unstable world saw Prince Abdulaziz and Novak highlighting the future demand.

“There are some concerns about recessionary forces that are seen, however that is a gloomy picture that’s been drawn where people are adding more fire to this sense of skepticism about the future … The only way to overcome this negative perception is a quick resolution to the trade issue,” said Prince Abdulaziz.

“By our agreement with OPEC+ we should have been producing 10.3 million barrels per day, we elected to voluntarily cut our oil production to a lower level than that,” he added.

Prince Abdulaziz on Wednesday said that the OPEC+ alliance, the group of OPEC and non-OPEC countries committed to maintaining oil supply cuts to support prices, as having gone beyond a temporary arrangement and “gone to a long-lasting relationship.”

“We have now gone beyond that temporary arrangement and gone to a long-lasting relationship between OPEC and non-OPEC countries,” Prince Abdulaziz said. “We are mindful of our responsibilities to our consumers,” he added.

“We lack predictability on the oil market and it is very difficult to make any forecasts … We need to be focused on coordination of our efforts … to make sure that the possible upcoming volatility can be mitigated by joint action,” Novak said on Wednesday.

Prince Abdulaziz started off his keynote discussion at Russia Energy Week on Wednesday by lauding the OPEC+ agreement, as well as the strategic energy alliance between Saudi Arabia and Russia.

“We are in alliance because there is a great deal of rationale in our alliance,” said Prince Abdulaziz.