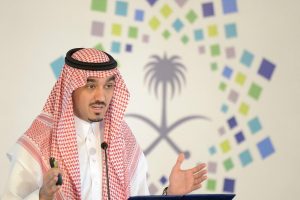 The election of Prince Abdulaziz, who will replace Turki Al-Sheikh that recently resigned from the post, will be done at the extraordinary meeting of the General Assembly of ISSF to be held on Monday, April 8 in Jeddah.

The new President of ISSF, who has also been serving as President of the Saudi Olympic Federation (SOF), will be in office till 2021.

Prince Abdulaziz Bin Turki has been a keen leader in the sporting world and an avid industrial development expert. He is currently the Board Chairman of Saudi General Sports Authority (SGSP); President of Saudi Arabia Olympic Committee (SOC) and President of International Camel Racing Federation (ICRF) as well as member of the IOC Marketing Commission.

He was once Board chairman of the Saudi Arabian Industrial Resin Limited, from where he restructured the industrial outlook of Saudi Arabia, leading to increase in total turnover of the system, despite the economic crisis in North Africa.

Prince Abdulaziz Bin Turki, born on April 6, 1983, was also instrumental to the development of the Middle East Radical Championship to be most complete championship in the region, with more than 25 cars on the Grid and a turnover of more than one million Pound Starling in the first year.

According to information from Jeddah in Saudi Arabia, chairman of the Board of ISSF for the period between 2019 and 2021, Dr. Yousef AlOthaimeen will also be unveiled at the event.

The General Secretary of the Organization of Islamic Cooperation (OIC), according to the information, will attend the meeting where the fifth version of the Islamic Solidarity Games in 2021 will be discussed, alongside the administrative, technical and financial reports done by the General Secretariat of the Federation.

It said that the ISSF will hold two Directors of the Board meetings.