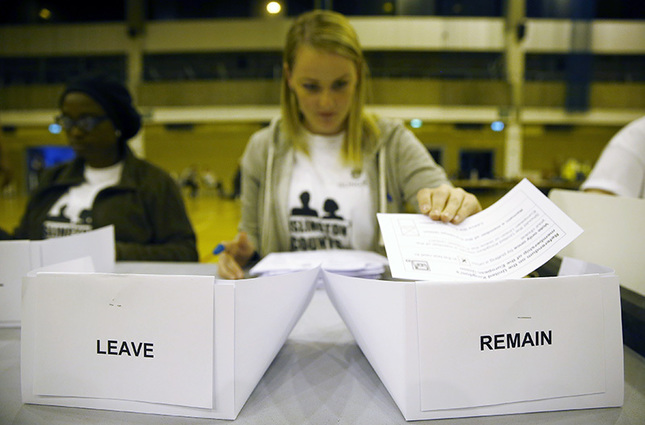 More than 1.5 million people have signed a petition calling for a second referendum, after a shock vote to pull Britain out of the European Union (EU).

An official website of the parliamentary petition at one point crashed due to the surge of people adding their names to the call for another nationwide poll following Thursday’s historic vote. “We the undersigned call upon HM Government to implement a rule that if the remain or leave vote is less than 60 percent based (on) a turnout less than 75 percent, there should be another referendum,” the petitioner said.

The “Leave” camp won the support of 51.9 percent of voters, against 48.1 percent in favour of remaining in the European Union.

Turnout for Thursday’s referendum was 72.2 percent.

Signatories to the petition appeared to be mostly in Edinburgh and London, both of which voted heavily in favour of “Remain.”

There is no obligation in British legislation for referendums to have a minimum share of the vote or a minimum turnout, as in some other countries. But EU rules say nothing about a member state that has already begun negotiations to leave the bloc changing its mind and reversing that decision under Article 50 of the Lisbon Treaty.

University of Strathclyde professor, John Curtice outlined two hypothetical scenarios in which a second referendum could take place: “if Boris Johnson is running the government and it is taking a long time to be implemented, two years down the line we could have another poll showing people actually want to reverse the decision and remain in.

“Then there could be a situation where the opposition party in a general election have a mandate to hold a new referendum,” he added.

But he said there would be no immediate effects from the current petition except for a formal discussion in parliament, which is required for any petitions that have over 100,000 signatures. – ‘You can’t have neverendums’ – The result of Thursday’s vote revealed stark divisions between young and old, north and south, cities and rural areas, and people with and without a university degree.

By 1400 GMT on Saturday some 1,554,000 people had signed the petition on the official government and parliament website — more than 15 times the number required for a proposal to be discussed in parliament.

On Friday, a House of Commons spokeswoman said the website had been taken out of action temporarily due to “exceptionally high volumes of simultaneous users on a single petition, significantly higher than on any previous occasion.”

The parliament’s Petitions Committee, which considers whether such submissions should be raised in the House, is to hold its next meeting on Tuesday.

The idea of a second referendum was raised during campaigning for Thursday’s vote.

UK Independence Party leader, Nigel Farage suggested last month that a close Remain win would build up resentment and not be the end of the matter.

“In a 52-48 referendum this would be unfinished business by a long way,” he told the Daily Mirror newspaper.

The Sunday Times newspaper backed the idea of a second referendum, “once the first has forced Brussels to undertake a more serious negotiation. In a real crisis the EU has always stepped back from the brink,” the “Leave”-supporting broadsheet said. But “Leave” figurehead Johnson downplayed the idea of a new vote. “I’m absolutely clear, a referendum is a referendum. It is a once in a generation, once in a lifetime opportunity and the result determines the outcome,” he said. “If we vote to stay, we stay, and that’s it. If we vote to leave, we vote to leave, that’s it. You can’t have neverendums, you have referendums.” [myad]