Home FOREIGN Those Trying To Tamper with 2 Holy Mosques Face The Wrath Of... 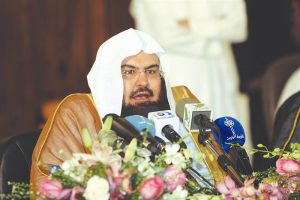 The General President for the affairs of the Grand Mosque and the Prophet’s Mosque, Sheikh Dr. Abdul Rahman bin Abdulaziz Al-Sudais has invited the wrath of Allah on those he called bandits that have been trying to tamper with the two monuments.
According to a statement from Riyadh, the country’s federal capital, Dr. Al Sudais insisted that those who are exposing the two Holy Mosques either by theft or assault are bandits that are spreading corruption on the earth.
He enphasized that “whoever tries to breach the security of the Two Holy Mosques will find strict deterrence that pre-empting his attempts, and will lead to complete failure.
“Allah willing, and by His power – then by the vigilant of the loyal security forces of this country, who we have witnessed on their sacrifices with several gaps of this blessed land.
“The Two Holy Mosques have sanctity, so whoever wants to corrupt them or was subjected them in any way will suffer of his inevitable fate, because Allah Almighty guarantees their protection.”
Dr. Al-Sudais was quoted as saying that the state would continue to take care of the Two Holy Mosques and their great islamic monuments, adding: “we will continue to maintain and restore them, and established exhibitions for them.”