Home FOREIGN The Enduring Legacies I Will Leave, Buhari Tells The World In US 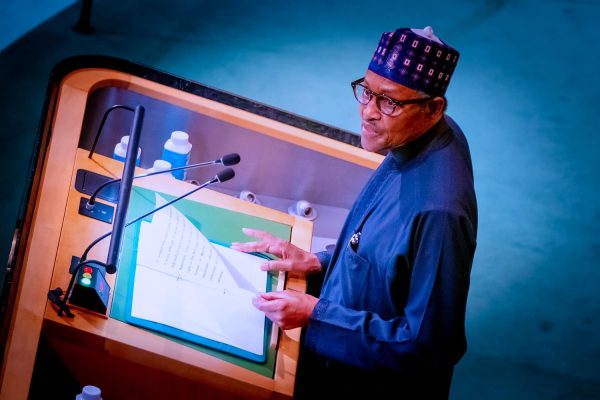 President Muhammadu Buhari has made it clear in New York, the United States of America that one of the enduring legacies he would like to leave is to entrench a process of free, fair and transparent and credible elections through which Nigerians elect leaders of their choice.

In his farewell speech to the 77th session of United Nations General Assembly (UNGA) as President, he said that there would be a new face speaking for Nigeria from the podium of the Assembly Hall from next year, 2023.

”As President, I have set the goal that one of the enduring legacies I would like to leave is to entrench a process of free, fair and transparent and credible elections through which Nigerians elect leaders of their choice.”

The President reiterated his commitment to constitutional term limits and Nigeria’s effort to promote rule of law and democracy in West Africa, citing the country’s support to The Gambia, Guinea Bissau and Chad during their political impasse.

”We believe in the sanctity of constitutional term limits and we have steadfastly adhered to it in Nigeria. We have seen the corrosive impact on values when leaders elsewhere seek to change the rules to stay on in power.

”Indeed, we are now preparing for general elections in Nigeria next February. At the 78th UNGA, there will be a new face at this podium speaking for Nigeria.

“Ours is a vast country strengthened by its diversity and its common values of hard work, enduring faith and a sense of community.

“We have invested heavily to strengthen our framework for free and fair elections. I thank our partners for all the support that they have provided our election institutions.”

Buhari highlighted the support for democracy in the sub-region, saying that in The Gambia, Nigeria helped guarantee the first democratic transition since independence and stood by the democratically elected Government in Guinea-Bissau when it faced mutiny.

He added that following the tragic death of President Idris Deby Itno of Chad in the battlefield, Nigeria joined forces with its other neighbours and international partners to stabilize the country and encourage the peaceful transition to democracy, a process which is ongoing.

“Democracy is an idea that crosses time and borders. Certainly, democracy does have its limitations.

“The wheels of democracy turn slowly. It can demand compromises that dilute decisions.

“Sometimes, it bends too much to special interests that exercise influence, not always for the general good, in a manner disproportionate to their numbers.

“But it has been my experience that a democratic culture provides a Government with the legitimacy it needs to deliver positive change.”

President Buhari recalled that the first time he could have addressed the Assembly was in 1984, as Military Head of State of Nigeria, and that it was a great privilege to personally address the Assembly, thirty-one years later, in 2015, “as the democratically elected President of my country.

“As I approach the end of my second and final four-year term, I am reminded of how much has changed in Nigeria, in Africa, and in the world, and yet, how some challenges remain.”