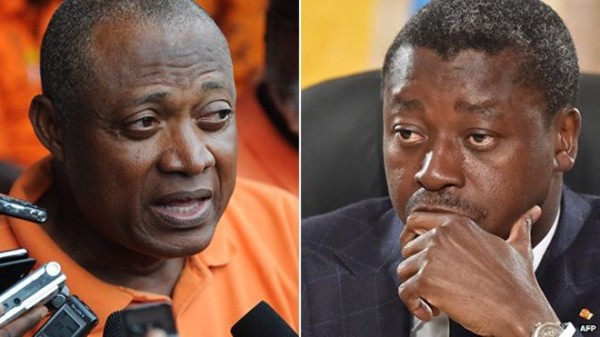 Togo is boiling as two Presidents emerged in the Presidential election held on April 25, even as thousands of opposition supporters marched through the Togolese capital today to protest the results of the election that extended the Gnassingbe family’s nearly five decades in power.

Though national and international observers have called the April 25 election free and transparent even as the United Nations has approved of the conduct of the vote, but the opposition in the west African nation of some seven million people has labelled the results fraudulent.

President Faure Gnassingbe won a third term in office with 59 percent of the ballots while his closest rival, longtime opposition leader Jean-Pierre Fabre, finished with 35 percent.

“We need people to be aware of the seriousness of the situation and that, together, we are working to stop it,” Fabre, who has declared himself the elected president, said today.

Adele Wavisso, a 32-year-old bread seller among the protesters in Lome, said: “those in power know very well that we did not vote for Faure. Our president is Fabre, and we will not give up.”

The opposition has said it decided not to challenge the results at Togo’s Constitutional Court because it was biased in favour of the president.

Gnassingbe’s father, Gnassingbe Eyadema, seized power in a coup and ruled with an iron fist for 38 years over the former German- and French-administered colony until his death in 2005.

The military then installed his son as leader and elections later that year were marred by allegations of rigging as well as violence which left up to 500 people dead and thousands injured.

Gnassingbe then won 2010 elections that the opposition also declared fraudulent but which were judged acceptable by the international community. [myad]