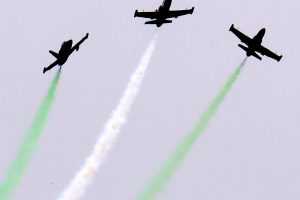 Intelligent report says that Iran is now moving military equipment, including drones and missiles, over the last several days to strategic locations, heightening fear that the preparation to conduct their own strike against the United States of America.

U.S. officials confirmed to CNN that the development could also be an indication that Iran is  moving war arsenal in fear of a potential U.S. strike.

An official told the news source that “there were indications that we needed to monitor the threats” more closely than at current levels. Another said the situation required “all Patriot batteries and forces in the area to be on high alert” against an “imminent attack threat.”

The U.S. is preparing for strikes in Iraq, Kuwait, Saudi Arabia, the United Arab Emirates and Jordan based on intelligence, CNN reported, and the U.S. Maritime Administration has cautioned commercial ships in the Middle East about potential “Iranian action against U.S. maritime interests in the region.”

Iran has used missiles on its drones in other attacks, including a prominent strike at two Saudi oil refineries last year.

Tensions between the U.S. and Iran have intensified after a U.S. strike killed Iranian general, Qassem Soleimani, driving Iran to promise retaliation against America. U.S. officials have said the strike was conducted to avoid an “imminent” attack being planned by Soleimani but have declined to provide more details.

Trump threatened to strike 52 sites in Iran, including cultural sites, if the country retaliated, which Iran says violates international law.

Foreign Minister Mohammad Javad Zarif called the strike “an act of aggression” against Iran in an interview on CNN Tuesday.

“We will respond lawfully. We are not lawless people like President Trump.”