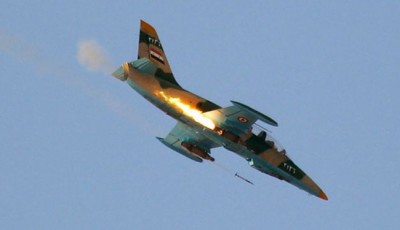 Two United State of American war planes, F/A-18 Jets were believed to have dropped 500 pound bombs on Islamic militants’ artillery positions and convoy which were being used to shell Kurdish forces that are defending the city of Irbil.
The attacks were announced a few hours ago in a statement released by Pentagon Press Secretary, John Kirby.
President Obama had said in a speech late yesterday night that U.S. military planes had earlier dropped a total of 72 bundles of food and water. The planes also “delivered 5,300 gallons of fresh drinking water and 8,000 pre-packaged meals” at the request of the Iraqi government to the Iraqi minorities surrounded by ISIS militants
The U.S Defense Secretary, Chuck Hagel told reporters that U.S military has sufficient resources as well as intelligence to launch both manned and unmanned Drone attacks on targets in and around Iraq.
In answering reporters’ questions on ISIS militants hiding among civilians, the Secretary said U.S military knows where the militants are and would seek them out where ever they are hiding.
It remains unclear how many militants were killed as a result of the U.S air strike.
The ISIS militants are going after the Yardis minorities who are not Muslims, and had issued ultimatum to the minority groups to convert to Islam.
Last week, a member of the Yardis minority group said that there was no one to help them.
But President Obama in his response yesterday night, said that America would help. The President also said: “As commander in chief, I will not allow the United States to be dragged into fighting another war in Iraq.”
American soldiers are stationed in Irbil where the U.S has a Consulate office. ISIS forces have captured much territory in Syria and Iraq and have talked about their plans to establish a new Islamic state in the captured territories where they have already established a new Caliphate ruler.
Obama had said that Islamic State (IS) fighters would be targeted to prevent the slaughter of religious minorities, or if they threaten U.S interests.

IS has seized Qaraqosh, Iraq’s biggest Christian town, forcing locals to flee. The Sunni Muslim group, formerly known as ISIS, has been gaining ground in northern Iraq and Syria for several months.

In a rapid advance in June, the group took control of the northern city of Mosul and advanced south towards Baghdad. It now controls large swathes of Iraq and Syria and says it has created an Islamic caliphate in its territory. [myad]