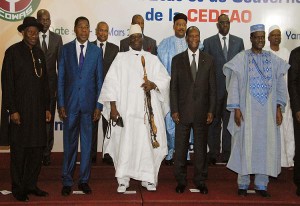 Heads of States and Governments of West Africa nations, under the aegis of the Economic Community of West African States  (ECOWAS) have risen in unison to condemn the prolonged terrorism that has been unleashed on parts of Nigeria by Boko Haram.
The Heads of Government in the West Afrcian Sub Region who converged today on Yamoussoukro, the Ivorian capital to deliberate on matters affecting the sub region, took particular interest on the ceaseless Boko Haram attacks in Nigeria.
In his opening address, Ivorian President and outgoing chairman of ECOWAS’ Authority of Heads of State and Government, Alassane Outtara, showed the concern of West African leaders on the Boko Haram activities even as he condemned the insurgency.
Outtara who spoke in French called for cooperation among the countries in the sub region, adding that sister nations can no longer afford to keep quiet because the insurgency affects Nigeria alone.
He spoke extensively on what his administration is doing to take Cote d’ Ivoire to the next level, adding that there is need for common ECOWAS tariff and opening up of more business opportunities among member nations. He also called for cooperation in the area of infrastructural development.
He commended Nigeria,  Senegal, Ghana and others for the contribution to the restoration of peace in Guinea Bissau and Mali. Also speaking, the president of ECOWAS Commission, Kadre Desire Ouedraogo said that for the sub region to achieve its MDG targets, leaders must develop human capital and consolidate on peace and security.
Human security, he said, must be at the core of regional concern, even as he too condemned the Boko Haram activities in northeastern part of Nigeria.
He said that it is “stark reminder” for sub regional leaders to urgently put heads together and nip the violence in the bud.
He commended the gradual peace and security which are returning to the sub region but added that leaders cannot afford to ignore the new threats posed by terrorists across the sub region.
President Jonathan and his Burkina Faso counterpart, Blaise Compaore who are mediators in the Mali crisis are expected to brief leaders on the current situation in the country.
In attendance at today’s event were President Yahya Jammeh of Gambia, Blaize Compaore of Burkina Faso, John Dramani Mahnma of Ghana, Ellen Johnson- Sirleaf of Liberia, Boni Yayi of Benin Republic,   Ibrahim Boukar Keita of Mali, Mahmadou Issoufou of Niger Republic and many others.