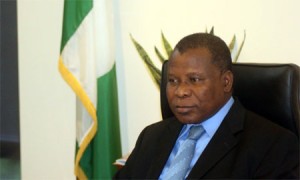 Nigerian Ambassador to the United States of America, Professor Ade Adefuye has accused the man he referred to as “the ranking Arizona senator and former Republican presidential candidate of cashing in on the pain of a distressed Nigerian nation not only to show contempt to the country but also denigrate the office and person of Dr. Goodluck Jonathan, President of the Federal Republic of Nigeria.”

Adefuye , who spoke at the monthly meeting of Constituency for Africa at the Ritz Carlton Hotel with them: ‘Message to the American People, Our Girls Will Be Back,’ emphasized that it is rude for Senator McCain to refer to the President of the largest economy in Africa and 26th largest economy in the world as ‘some guy called Goodluck Jonathan.’

He asked McCain where his principle of respect for the territorial integrity and sovereignty of nation states had gone.

“Has McCain forgotten the results of such acts just a few years ago? Could he not learn from the results of previous unilateral military interventions?  One wonders what could have happened if the 2008 elections have gone the other way and McCain became the president of the most powerful nation in the world. But thanks to providence. The good Lord has a better plan for the people of the world.”

Ambassador Adefuye reminded the US Senator that Nigeria is the America’s largest trading partner in Africa and America’s most important strategic partner in the continent, even as he reminded the former US presidential candidate that his statement had “reinforced his image as a hawk and reminded us of his status as a veteran.”

The Ambassador was happy that US Senate ignored him and passed a balanced Resolution on May 14 condemning the abduction of Chibok girls by urging the US government to assist Nigeria in its effort to rescue the girls safely.

“This has strengthened the hands of the US government to cooperate with Nigeria in dealing with Boko Haram.”

He advised Senator McCain to engage the Nigerian people in a constructive and meaningful engagement even as he urged him to always ask his staff to brief him properly on Nigeria “and accord our country as well as the Office of the President the respect they deserve.”
Adefuye thanked the American people whom whose support would facilitate the efforts in bringing the abducted Chibok girls safely and bring the menace of Boko Haram to an end. [myad]