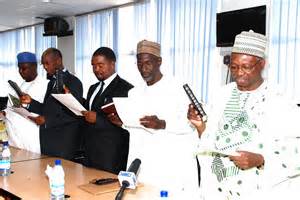 In a vote conducted today by the INEC chairman, Professor Attahiru Jega, after he met with political parties and the civil society, 21 RECs said the elections should continue as planned while 16 others voted in support of a reschedule.  Nigeria has 37 RECs, each for a state and the Federal Capital, Abuja.

The outcome of the vote came as Nigerians await INEC’s decision on whether the elections are moved or not.

This was after 17 political parties had earlier voted for a postponement as against 11 that argued for INEC to remain faithful to its time table, the mood across the land suggested that INEC will capitulate to a demand by military and security chiefs asking for a six weeks postponement on the presumed grounds that they have a special operations to we against the six year insurgency which appears to be spreading on a daily basis.

In their own consultative meeting with the INEC top brass, the Situation Room called for the resignation of military chiefs and security heads including the Police “on account of their inability to exercise their constitutional responsibility to secure lives and property at all times including during the elections.”

Speaking for the group in its statement, Agianpe Ashang, a senior programme officer at the Policy and Legal Advocacy Centre, PLAC, said the action of the security chiefs “amounted to blackmail [to] arm-twist the Election Management Body away from its constitutional guaranteed function of conducting elections.”  The group them asked Nigerians to defend their hard won struggle to entrench democracy in the country.

Jibrin Ibrahim, a senior fellow at the Centre for Democracy and Development (CDD), in Abuja, who was at the meeting, said Mr. Jega told the meeting that security operatives informed INEC that they were commencing a six weeks special operations against Boko Haram insurgents in the north eastern corridors of the country and would rather not be distracted by the elections.

The opposition All Progressives Congress (APC) has rejected any plan to postpone the election saying such calls are sponsored by President Goodluck Jonathan and the ruling party to stave their imminent defeat at the polls.

The reasoning among civil society members align with popular enthusiasm for the election even in the north eastern regions where the insurgency is active.

According to a political survey recently conducted by the NOI polls, analysis by geo-political zones revealed that the North-West (89%) and South-East (87%) regions accounted for the largest proportions of Nigerians who expressed optimism for voting in the 2015 general elections when compared to other regions, although a majority of residents in all the geo-political zones expressed optimism in voting in the 2015 general elections, with a minimum 76% (North Central). Also, respondents aged 46-60 and 18-21 years showed more optimism for voting in the 2015 elections than other age-groups. [myad]