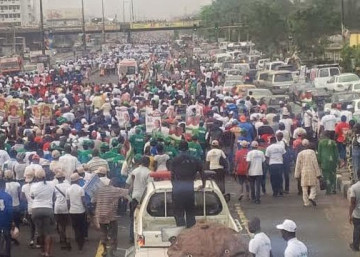 Thousands of All Progressives Congress (APC) members and supporters, today, embarked on a solidarity march in Lagos in support of the party’s Presidential candidate, General Muhammadu Buhari and other candidates at various levels in the March 28 and April 11 elections.

The march, which commenced at 8.20am, began at Maryland via Ikorodu Road to Teslim Balogun Stadium in Surulere, Lagos .

Lagos State House of Assembly Speaker, Mr. Adeyemi Ikuforiji; and others are also on the trail.

Crowd of supporters, including commercial motorcycle riders and traders, lined the streets shouting and singing in solidarity. [myad]