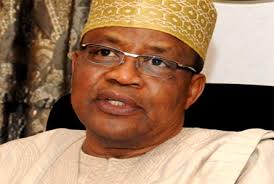 Former Nigeria military President, General Ibrahim Babangida is not happy with the way the ruling Peoples Democratic Party (PDP) has been questioning the reputation, patriotism and loyalty of the Presidential candidate of All Progressives Congress (APC), General Muhammadu Buhari simply because he was once a soldier.

In a statement, General Babangida said that nobody is stopping anyone from campaigning for their preferred candidates contesting various positions in the elections, “but to do that at the expense of the reputation, contributions, patriotism, loyalty and sacrifice of former presidents to the Nigerian state is, to say the least, immature.

“Apart from promoting hate campaign which clearly undermines the modest contributions of these former presidents, the commentaries in the documentary against the former presidents leave a sour taste in the mouth.’’

In clear attempts to whip up support for President Goodluck Jonathan, certain persons, groups and individuals have embarked on several campaigns of calumny against former military Heads of State and presidents who have had the opportunity to govern this country. Of particular reference is a one-hour documentary aired on Silverbird Television on Tuesday night; 24th March, 2015 that deliberately impugned the integrity of Generals Olusegun Obasanjo, Muhammadu Buhari, my humble self; Ibrahim Babangida, late Sani Abacha, Abdulsalami Abubakar, and T.Y Danjuma; all of whom have had the privilege of presiding over the affairs of this great country at various levels. It is either that those promoting the hate documentary are intellectually deliquent or they suffer memory loss; or a combination of both.

I have my very strong reservations about the contents and thematic focus of the said documentary. Apart from promoting hate campaign which clearly undermines the modest contributions of these former presidents, the commentaries in the documentary against the former presidents leave a sour taste in the mouth. Nobody is stopping anyone from campaigning for their preferred candidates contesting various positions in the elections, but to do that at the expense of the reputation, contributions, patriotism, loyalty and sacrifice of former presidents to the Nigerian state is, to say the least, immature.

For record purposes, and without sounding immodest, the idea of a PDP that has now become the “largest party in Africa” started in my home, here in Minna. With the support of my fellow colleagues, we prepared the way for this democratic process that has now led us to where we are presently. We built the democratic infrastructure and architecture. Those who are parading themselves as democrats today, all participated in military governments. As a deliberate principle of remaining unsung, or blowing my own trumpet, I have elected over the years to maintain dignified silence on so many issues concerning Nigeria while I cultivate my access to each sitting President to pass across my advice in whatever form.

It is on record and this is incontrovertible that the government I ran paraded some of the best brains this country can be proud of. I still remain eternally grateful to those wonderful brains who participated in our government to fashion a new roadmap for re-engineering the country. Some of our policies have remained unsurpassed till date and most of what the country enjoys today was a creation of the Military. From primary healthcare to good roads, DFRRI, Better Life for Rural Women, housing, river basin authorities, MAMSER, new airports, agricultural development and other economic infrastructure, to mention but a few, were platforms where our interventions were felt. We achieved that much with very slim resources. If we had the several billions of dollars that are flying around today, we would have turned Nigeria to the Dubai of Africa.

The military is an institution that is so dear to my heart. It is an institution that nurtured my growing up and my achievements in life. I am not only sold to the military institution and by extension the Nigerian state, I am betrothed to it. As a profession, retirees are bound to participate in politics and democracy as an all-inclusive process, same way that Doctors, Lawyers, Teachers, Nurses, and Civil Servants get involved in it. It is the reason why I ventured into politics in 2003 before I quit in 2010. It is the same reason why General Obasanjo participated and got elected; and now General Buhari. It is therefore very curious that promoters of President Goodluck Jonathan’s aspiration would attempt to demonize and stigmatize former military leaders and cast aspersions on them in order to malign their reputation. This is very unfair.

Fact is; the military fought a civil war to keep this country together. What I suffer today is a consequence of the injuries I sustained during the Nigeria Civil War. I am not sure there is any patriotism that is more than that. Some of us were prepared to die for the country. The military is presently combating the dreaded Boko Haram sect to restore Nigeria’s territorial integrity. What law under a democracy forbids retired military personnel from participating in politics and presenting themselves for election? Over 90 percent of American Presidents have military background. Leadership training is better grounded in the military than any other profession. And the military parades some of the best brains in any country, including Nigeria. In fact, some of my military students that I tutored have Doctorate Degrees. It is therefore callous, wicked, out-of-sync, cynical and a show of crass ignorance for anyone to undermine the military institution by embarking on mudslinging campaigns against former presidents and leaders of military background.

While those campaigners are pointing their accusing fingers at us, they forget to recall that the present Director-General of the PDP Presidential Campaign Organization is actually a retired Military Officer. It is this form of demonization and stigmatization that often compels us to exhibit espirit de corps amongst ourselves in support of our military institution and colleagues when the stakes are high. As disciplined military officers, we are patriotic Nigerians and must be treated with utmost respect and decorum.

ISSUED ON BEHALF OF GENERAL IBRAHIM B. BABANGIDA, GCFR.