Home NEWS 2015 Poll Buhari Thanks Nigerians For Their Support, Warns Against Use Of Military For... 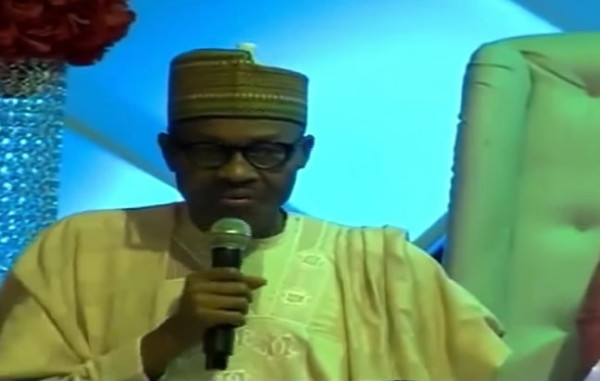 Presidential candidate of All Progressives Congress (APC) has expressed gratitude to Nigerians for their support despite sustained damaging campaign against his person by Peoples Democratic Party (PDP), even as he warned against the use of soldiers for election duties.
General Buhari, who addressed newsmen today as the nation waits for Presidential election in less than 30 hours from now said: “I specifically called this press conference to thank millions of Nigerians for their support and their enthusiastic commitment to the imperative of change. I am particularly overwhelmed that, despite the sustained smear campaigns against me by the ruling PDP, the support Nigerians have for me has remained intact. The enthusiasm of Nigerians for change is understandable.”
The APC Presidential hopeful noted that Nigerians’ support for him stemmed from the fact that the 16 years of PDP administration is a story of despair, despondency, disillusionment and pervasive fear, caused by unprecedented insecurity.
He said that the basic functions of the government are the security, welfare and happiness of the citizens which he said has existed only on paper, adding: “it is morally wrong for any government that has woefully failed in these basic responsibilities to demand or expect another mandate from the disillusioned citizens of Nigeria.
“The PDP administration has exhausted all its goodwill and lost all the argument on performance and competence and is, as a result, seeking to retain power at all costs, regardless of performance, is a shameless reflection of desperation and greed for power. A government that abandoned its citizens to their fates has no reason to remain in office a day longer than necessary.
“I am pleased to say that the best judges of a government’s performance are its own citizens. The popularity of the PDP is at the lowest ebb, and this shrinkage of goodwill is irretrievable.”
Buhari said that Nigerians who are desperately yearning for change are enthusiastically looking forward to Saturday March 28, and April 11th 2015 to exercise their franchise by voting for change.
“Nigerians are desirous of change because they don’t want the continuation of their present miserable existence under PDP’s ruinous rule. They are tired of a government of failed promise, and are earnestly marching ahead to embrace a government that loves the welfare of its citizens.”
The retired General in the Nigerian Army said that he is worried about the increasing temptation by the government of PDP to drag the military into duties outside their professional training.
“This tendency makes Nigeria look like those banana republics where chaos is the order of the day. While I commend our soldiers in the current war against terrorism and threats to the country’s territorial integrity, we should exercise caution in the deployment of soldiers during elections as the courts have severally warned. It puts their political neutrality and credibility at risk.”
General Buhari said that the Saturday election presents a great opportunity for Nigerians to come out en-masse and vote to remove an incompetent government from office.
He said that the beauty of democracy is that it gives power to the people to change the government peacefully, asking Nigerians to come out en mass to cast their vote.
Buhari reminded Nigerians if they don’t vote, it may be difficult to change their miserable conditions. “I urge all our supporters to also conduct themselves peacefully, and resist any act of deliberate provocations to derail the fast-moving train for change.
“I urge my supporters and my party to show exemplary conduct of orderly behaviour. They must avoid anything that might make them play into the hands of the PDP mischief makers, who are determined to discredit our party.
“As a people, this is not the kind of democracy we bargained for when we celebrated the end of military rule in May 1999. The basic challenges facing Nigerians today are: the economy, insecurity, unemployment, and corruption. These challenges demand competence and political will to handle. Nigeria is adrift under the current PDP administration. Millions of Nigerians are captives of fear because of insecurity; thousands of our unemployed youth are haunted by suicidal temptations because of uncertain future; the country cannot achieve progress because pervasive corruption guzzles huge resources meant for the welfare of the people. And finally, how can the economy do well when leaders are incompetent and corrupt? Can any economy grow under the feet of corruption?
“When the government lacks the will, the competence and the courage to handle these challenges, are Nigerians not legitimately entitled to demand for change for a better tomorrow? I am not contesting this election because I want power and money. I am doing so because Nigerians believe I have what it takes to achieve the much-needed change. When the people express in your ability and integrity to lead them, you have a responsibility to answer the clarion call to national service.”
General Buhari expected Nigerians to do all that is within the law to protect their votes and ensure that the will of the people is not subverted or in any way undermined.