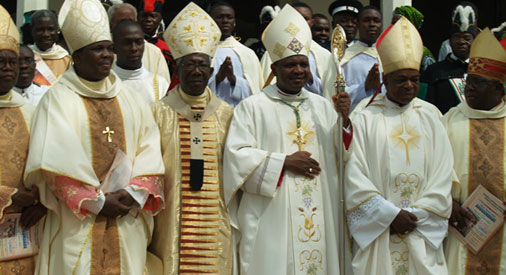 Catholic Church under the canopy of Catholic Bishops Conference of Nigeria (CBCN), has expressed fear that the way things are going, there may be outbreak of violence that would lead to loss of lives, as a result of which it advised Nigerians to stockpile food items in case shops close for some days, even as it promised to deploy 4,889 of its members as election observers across 23 States of the country in the February general elections.
The Executive Secretary of Catholic Caritas Foundation of Nigeria, under the Catholic Bishops Conference of Nigeria, Rev. Father Evaristus Bassey, at a news briefing today in Abuja expressed he expressed fears of possible outbreak of violence.
According to him, the current electoral campaigns leading to the general elections has already charged the political atmosphere thereby posing dangers and humanitarian emergencies.
“From our discussions with our partners in some parts of the country, the certain towns and cities are already so charged that potentially lives and properties are not safe, depending on the outcome of the elections. It does appear that a predetermined outcome for the elections is demanded by some groups that no matter how free and fair it is, if it does not suit them, they would resort to violence that could lead to loss of lives.”
“As you may know, there are several forms of humanitarian crises already brewing in Nigeria: There is the silent Sahel food crisis affecting the food and nutrition needs of those states in the Sahel region like Sokoto, Kebbi, Yobe etc; there is the post-flood humanitarian crisis, with many still to recover their livelihoods even after billions of naira were collected; there is the potential Niger Delta crisis which could erupt anytime, and there is the mother of all humanitarian crises caused by Boko Haram which has led to the greatest displacements and miseries since the civil war.”
Rev. Father Evaristus Bassey said that the Catholic resolved, at a Contingency Planning meeting for possible elections violence attended by JDPC representatives from volatile states, that the Church and Mosque leaders should intensify sensitization of their members to avoid violence whatever the outcome of the elections
The Catholic, he said, also asked Clergymen themselves to avoid being used to incite or being partisan in their sermons and that Clergymen should admonish their members against inciting and abusive language in the social media
Rev. Father Evaristus Bassey said that it was also resolved that traditional leaders should hold meetings with youth leaders on the need for peaceful conduct during and after the elections even as it also called on parents and elderly relatives to caution their wards and warn them not to be used as instruments of violence by politicians.
It urged the citizens to be aware that during voting, there will be a card reader that would match the thump print on the permanent voter card with that of the holder and that it will therefore be useless to collect other people’s voter cards
“Citizens should not rely on the assurances of security agencies alone, as the scale of violence, if it happens, may overwhelm their capacity, and therefore must be extra vigilant
“Citizens must pray against violence. On this note the JDPCs will be holding prayer rallies across five geo-political zones, except for the North East.
In the case of a possible outbreak of Violence “we advise the citizens in volatile places to stock essential commodities in case shops are not open for days. Citizens should by now make arrangements for safe havens in case they have to escape from their homes; and those who can, should move their families from volatile areas, as the right to life is stronger than the right to vote
“After voting, although they could stay back to observe the counting, we advise ordinary citizens in volatile places to go home, and allow politicians to sort themselves out.
“The Catholic Church is deploying 4889 observers in 23 States, these observers will also stay back to observe to the end.
“We advise churches and mosques to set aside some funds to deal with possible humanitarian crises that may arise, to complement government effort which often times is inadequate and therefore unreliable; especially with the experience of the current IDPs situation. After more than four years of a humanitarian crisis caused by Boko Haram we should be more proficient in handling these things but government is still dropping  items and going away. Up till now there are no proper camps.
“Finally, we advise Nigerians to know that politicians are all the same. If APC, everyone will move there and if PDP wins, they will move back to PDP, so it is not worth it destroying property and or especially destroying lives just because one set of politicians have lost elections.” [myad]