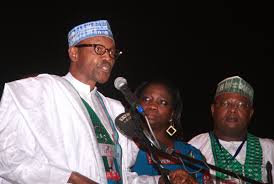 The Presidential candidate of All Progressives Congress (APC), General Muhammadu Buhari has said that inspite of hate speeches and adverts being broadcast in the media by the agents of the ruling Peoples Democratic Party (PDP), he would continue to be committed to the Abuja Peace Accord that was signed was signed by him, President Goodluck Jonathan and other stakeholders in the 2015 general elections. The peace accord was aimed at forestalling violence during and after the general elections.
A statement in London, United Kingdom today by the Director of media and publicity for the APC Presidential Campaign Organisation, Garba Shehu, quoted Buhari as having said that Nigeria is bigger than any political party or any individual, and that the country’s greatness would outlive any election.
“Despite the series of provocations by the PDP, through hate speeches and adverts being broadcast in the media, we call on our supporters all around the country to remain calm but resolute.”
General Buhari also asked his supporters to ignore any distractions and remain focused on making the democratic process work, encouraging them to ensure that they collect their Permanent Voter Cards (PVCs) before the 8 March deadline.
The General reminded Nigerians that the country in a democracy, and that the greatest weapon each citizen has is his or her vote.
He therefore called on all his supporters across the country to go out en masse on 28 March and 11 April and cast their ballots for him.
“Your greatest weapon is your vote. That is the only way to bring about CHANGE, not through violence.”   [myad]