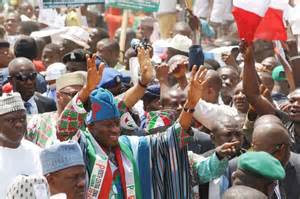 President Goodluck Jonathan has said that Kaduna state has benefited tremendously in terms of education, transportation and many more from his government in his first term in office and promise to do more if he is re-elected for second-term in office.

President Jonathan, who spoke today at People Democratic Party (PDP) presidential rally which held at the Ahmadu Bello Stadium (ABS), Kaduna, said that when he return, he would concentrate in reviving the moribund textile industries the state.

According to him, important role of textile industry in the economy is enormous, that his next administration would shift attention to revamping it for the purpose of geerating more employments.
“The greater thing we need to do within the next one year is to revive Kaduna textile industries. We understand that it will generate employment opportunities for our people.

“With power in place now, reviving these companies and ensuring continuity will now be easy. We must do everything to revive it,” he said.

Speaking at the rally which was attended by thousands of party members and supporters, the Senate President, Senator David Mark, urged the people of Kaduna state to vote for Jonathan in the February presidential election so that he could continue with his transformation agenda of which Kaduna state had been a major beneficiary.

“Kaduna should not make the mistake of voting the wrong people because we are all looking up to the state. We must not allow those who will rig to succeed. We must stay and defend our votes.

“Mr. President has the love of the country at heart than any other presidential candidate today. Here is a man who has done a lot for the country. The least you can do is to vote for him to continue his transformation agenda” Mark said. [myad]