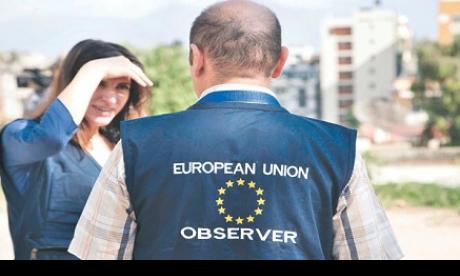 Foreign observer teams, who went round the country as votes were being cast in the Saturday election have commended the Independent National Electoral Commission (INEC) for what they described as its impartial handling of Saturday’s polls.

This is just as the governments of Britain and United States of America have expressed concern that the collation process of results may be subjected to deliberate political interference, even though there has been no evidence of a systemic manipulation of the election process.

While shying away from making a clear-cut pronouncement on the conduct of the presidential and National Assembly elections, the European Union Election Observation Mission (EUEOM) noted that despite challenges recorded, INEC appears to have executed its duties impartially.

It also observed that despite the challenges, the mission did not observe any systematic subversion, and that nationally people were free to cast their votes.

The Chief Observer of EUEO Mr. Santiago Fisas Ayxela, while presenting the first preliminary statement of the mission in Abuja yesterday, however, noted that it has reports of violence in some places, delay in arrival of INEC officials and voting materials, malfunction of card readers, ballot snatching and Boko Haram attacks.

“We still have observers out overseeing events at collation centres which in my opinion is extremely critical, and we are watching this,” he said.

He disclosed that his mission would present its final report with recommendations for improvement in two months’ time.

The Deputy Chief Observer, Ms. Hannah Roberts, also added that it was not the speed at which the results are announced that is critical, but the credibility and integrity of the final results.

She said it would be necessary to reform Nigeria’s electoral laws to allow independent candidacy, regulation of campaign finance, and transparency and opportunity for remedy.
In a similar manner, the Commonwealth Observer Group described the polls as generally peaceful and transparent but noted that there was room for improvement in the elections.

Presenting the preliminary report of the 10-man team, the Chairperson of the Group/former President of Malawi, Dr. Bakili Muluzi, expressed concern that persons performing election duties and essential services on polling day were unable to vote leading to their disenfranchisement.

He however commended Nigerians for showing commitment and determination by the huge turnout.

“The presidential and National Assembly elections were generally peaceful and transparent,” Muluzi said.

After their preliminary remarks on the election, international observer teams proceeded to meet with President Goodluck Jonathan at the presidential villa on Monday.

The observers, who spoke through former Ghanaian President John Kuffour, said the election was peaceful and transparent.
Those who were at the presidential villa included the former Malawian president, who led the Commonwealth team, former President Amos Sawyer of Liberia, who led the African Union team, and Kuffour, leading the ECOWAS team.

Kuffour, who spoke to State House correspondents after the meeting with Jonathan, said: “We have been in the country with our groups observing all over the country. Now, we have come to a point where from what we have seen. I’m sure you heard from some of us yesterday (Sunday) that the elections have been peaceful, transparent and credible up till yesterday.

“We appreciate the processes are not yet done till the results are declared then of course the aftermath of the declaration.

“But we have come this far and we wanted to give an interim report to the authorities that mandated us to come, and to the world and to Nigerians in particular, to let everybody know that Nigeria so far has been at peace with the process and so we appeal to Nigeria to continue in this mood throughout the entire process.

“So that at the end of the day, the people of Nigeria will be satisfied with themselves that they used the process to get the government they want and they deserve.

“Nigeria succeeding will not only be in Nigeria but for West Africa and the continent, and we will all be made proud of the success achieved by Nigerians for themselves and for all of us.”

However, the US and UK governments on Monday expressed concern that the collation process of results might be subjected to deliberate political interference, even though there has been no evidence of a systemic manipulation of the election process.

In a joint statement by US Secretary of State John Kerry, and UK Foreign Secretary Philip Hammond, both governments commended the determination of Nigerians to register their votes.

“So far, we have seen no evidence of systemic manipulation of the process.  But there are disturbing indications that the collation process—where the votes are finally counted—may be subject to deliberate political interference.

“This would contravene the letter and spirit of the Abuja Accord, to which both major parties committed themselves.

“The Governments of the United States and the United Kingdom would be very concerned by any attempt to undermine the independence of the INEC, or its chairman, Professor Jega; or in any way distort the expressed will of the Nigerian people,” said a statement released by the US Embassy in Abuja yesterday. [myad]