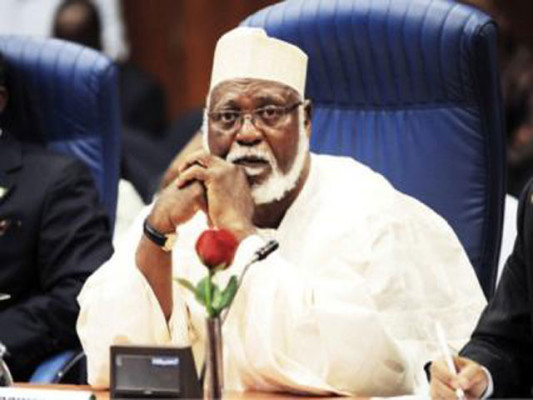 Former Nigeria Head of State, General Abdusalami Abubakar, has commended President Goodluck Jonathan for conceding defeat and congratulating General Muhammadu Buhari on his victory in theSaturday’s presidential election.
Abubakar who spoke to newsmen at the Presidential Villa, Abuja today shortly after leading members of the National Peace Committee for the 2015 general elections to a closed-door meeting with Jonathan at the Presidential Villa, Abuja, said that Buhari had earlier told him that Jonathan called him at about 5.15pm to congratulate him.
He said that they were in the Presidential Villa to thank Jonathan for his statesmanship, the former military leader urged all stakeholders to emulate Jonathan’s sportsmanship.
“We are here to ensure peace is maintained at this moment. We thank Nigerians and all international community who came to support us during the elections.
“The elections have been very peaceful despite the hitches here and there. At the end of the elections, at the counting, there are a lot of upheavals that have happened but thankfully they have been contained.
“We were at the middle of a meeting with the international observers to try to see how we can still water the tension down when gladly I called Gen. Buhari that we are going to see him. He told me that Mr. President has called him at about 5.15 pm and congratulated him and conceded defeat.
“We were spellbound and the reason we have come here is to thank President Jonathan for this statesmanship.
“In the history of Nigeria, I think this is the first time where a contestant has called his rival to congratulate him and through this point, President Jonathan maintains a point that the blood of Nigerians is not worth his Presidency and by his action, he has proven that.
“He has proven that he is a man of his word,‎ because during our interaction on this peace committee, he has always maintained that he is going to accept the result of the elections whichever way it is done. And he has proven this.”
General Abubakar advised all Nigerians to join hands and assist the President in peaceful handing over, adding that all politicians, those who are celebrating and those who are ruing their loss, to give peace a chance.
The former Head of State said, “In any contest, there is always going to be a winner and President Jonathan has accepted that he lost and we want to thank him on behalf of Nigerians.
“I want to thank President Jonathan for being the statesman that he is, he has proved that he is a statesman and he has the love of this country in his heart. So, Nigerians should please help him to ensure this is real.
“For any Nigerian, who is aggrieved, the electoral law has procedures for seeking redress, so if anybody has ‎any grievance, he should apply through the law.
“I appeal again to our youth, to everybody to please give peace a chance and accept that the chief contestant himself has accepted.”
[myad]