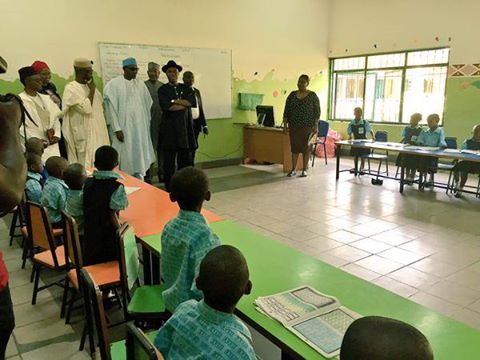 Governor Chibuike Rotimi Amaechi of Rivers State has called on Nigerians to beware of the ruling Peoples Democratic Party (PDP) whose top members are magicians when it comes to elections.
Governor Amaechi who is also the Director-General of the APC Presidential Campaign Organisation said in Port Harcourt during the party’s zonal campaign rally today that President Goodluck Jonathan and PDP are afraid of the forth-coming general elections and would do anything to rail-load themselves back to office.
“You know I used to be in PDP. For the first time, I can see real fear in their eyes, even the president is afraid. You can see that everybody is now jittery because the game is up.
“This time in South-South and South-East, we will not write result. We are going to vote and our votes will count and I am proud to be part of APC. You must vote and stay there because members of PDP are magicians”.
He described PDP as an atrocious party with unbelievable record of abuse and intimidation. He also condemned the attack on his wife Judith by PDP members who way laid her at Ahoada West during her campaign there.
Governor Amaechi told the gathering that God has already told Nigerians who will be the next president but that person, definitely is not Jonathan.
“The sad part is that the police are arresting us every day but all these will be over in two weeks. So far, over 30 members of APC have been killed in recent times. No day passes without the killing of one APC member or the other but they will account for all their atrocities in due time.
”They cannot intimidate us forever. Let me tell you that my courage comes from knelling down, praying and asking God for strength.”
Speaking at the rally, the National Chairman of APC, Chief John Oyegun, said that the burial ceremony of PDP which was postponed by President Jonathan will still hold on March 28.
Oyegun said that despite the needless postponement of the elections, Nigerians will still give a befitting funeral rite for PDP.
The chairman who told a surging crowd of party supporters of APC’s political exploits in the North-West where they were until a few days ago, described South-South as critical.
‘We were in the North-west yesterday. You know the North-West is the home base of the in-coming president. South-South is also important to us because it is the home of the out-going president.  These zones are crucial.
“I thank you for your support, courage and resilience. You have survived your oppressors despite all odds. Goodluck Jonathan is our son and brother but he has failed us as a region and Nigeria. So we want to send him on an honourable retirement. I know you will all support the APC in this venture because we must send him home.
“PDP is confused and disoriented. They have no sense of direction. PDP is down but not out yet. So a lot of work still needs to be done, that is why we are here. Let me also assure you that PDP’s funeral still holds despite the rescheduling of the elections.
“We will have a good funeral ceremony for PDP come March 28. I want you to promise me that you will all come out and deliver these votes. And that you will be there, ready and prepared to make sure that every vote counts. We are going to deliver the entire South- South to our president in-waiting, General Muhammadu Buhari.”
Oyegun who described APC’s governorship candidate in Rivers State, Dr. Dakuku Peterside as a scholar and gentleman whose tenure as governor will bring honour and development to the people, called on voters to disregard the lies of PDP.
Governorship candidate of APC in Rivers State, Dr. Dakuku Peter-Side described corruption and insecurity as impediments to national growth and development. He insisted that these hindrances, coupled with the misrule of the last six years, have further worsened Nigeria’s crisis.
Peterside who led all the APC governorship candidates in the region to the podium, pledged the zone’s support to candidates of the APC.  He described the last six years under President Goodluck Jonathan as traumatising and hellish, calling on the people of the region to reject the Peoples Democratic Party, PDP and it’s candidates in the forth-coming elections.
“It is evident that our people want a new life and a Nigeria where things will work. We want a Nigeria that is not plagued by insecurity and corruption. General Muhammadu Buhari represents a united Nigeria where people will live in peace and harmony.
“Therefore we are going to make a statement with our votes come March 28 that our so-called brother does not represent our interest. We will also confirm what the whole world already knows: that we are progressives and that we are in tune with the rest of Nigeria on the great change that is coming”.
Peterside assured chieftains of APC that the people of Rivers State are conscious of the consequences of their actions on both March 28 and 11 April, adding that their lives and existence will depend on how they cast their votes.
“As we vote for our party and General Buhari, we know we are voting for ourselves, therefore the people of South-South will mobilize massively for all the elections.”
The rally featured General Mahammadu Buhari, presidential candidate of the APC, his running mate, Professor Yemi Osinbajo; Chief John Oyegu, National Chairman; Governor Chibuike Rotimi Amaechi of Rivers State, Prince Hilliard Etagbo Etta, deputy National Chairman of APC; Timipre Sylva, former governor of Bayelsa State and members of the party from the entire South-South resolved to massively vote for APC to save Nigeria.