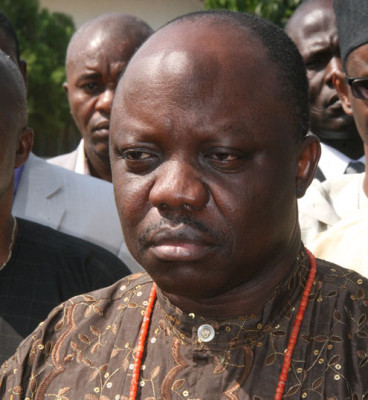 Delta State Governor, Dr. Emmanuel Uduaghan has expressed concern over the Independent National Electoral Commission’s (INEC) decision to use card readers in the conduct of the forthcoming general elections.
The Governor expressed the fear that should the card readers fail and or many people are unable to vote because of inability to collect their permanent voters’ cards, there would be confusion and a serious challenge for the country.
Speaking when the European Union (EU) Ambassador to Nigeria and the Economic Community of West African States (ECOWAS), Mr. Michel Arrion paid him a courtesy visit in Asaba, the governor said that he had nothing against the use of the card readers but that it must be well tested to ensure that nothing goes wrong on Election Day.
“Delta state has 40 percent of what we call difficult areas to reach, meaning water and swamp and right now we know that INEC is in the process of using card readers and PVCs. We are not against the card readers but we also do not want it to be used in such a way that our people will not be happy at the end of the day. We think that enough underground work has not been done yet on the use of the card readers.”
He advised that the electorate should be properly sensitized and mobilized to ensure that they are carried along and that without hitches even as he noted that there has been noticeable improvement. He said however that the issue of permanent voters’ card is yet to be fully resolved.
According to him, if the elections had held on February 14, Nigeria would have been faced with serious challenges which may have resulted in confusion and chaos, adding that the postponement of the elections from February 14 saved Nigeria from embarrassment and crisis.
The governor advised the European Union in particular to work with the INEC for successful general elections.
“Our people need to be better educated on the use of the card readers if not it will turn out to be a mess. I can comfortably say that if that election on February 14th was held, Nigeria would have been in confusion. It is obvious from what we can see because we still have the challenge of people going to collect their permanent voters’ card.”
Earlier, Mr. Arrion who was accompanied by the EU Project Director, Mr. Temitayo Omole, told the Governor that he was on tour of states of the country, adding that the EU is interested in peaceful elections in Nigeria.
“We are very much involved in the electoral process, the EU is supporting INEC, we are also observing the elections,” he said, disclosing that the EU has 50 observers across the country and will stay back till May this year to monitor happenings before and after the elections.”
On the use of card reader for the general elections, Arrion disclosed that the EU was partnering INEC in carrying out technical stress-testing of the card readers and in the training of INEC staff.
He observed that energy is the major challenge of Nigerians, adding that the EU is also interested in food security, nutrition, good governance and the rule of law. [myad]