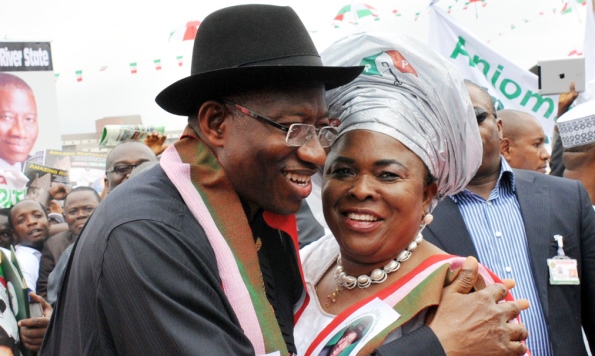 “I’m not ready to carry food to my husband inside prison oh!” This is the exact word of the wife of President Goodluck Jonathan, Dame Patience Jonathan who spoke yesterday in Ado Ekiti, during the rally of the women’s wing of the Peoples Democratic Party (PDP).
Making a reference to the Presidential candidate of All Progressives Congress (APC), General Muhammed Buhari, the First Lady asked: “what did they forget in Aso Rock? If you vote the PDP and Jonathan, it would be better for you. If you vote the APC, you will go to prison. How can you jail somebody for 300 years?”
Dame Patience, who openly admitted that the Office of the First Lady, which she occupies, is illegal however, said there is nothing wrong in a woman supporting her husband in office.
“They said there is no Office of the First Lady. Already, we know that there is no Office of the First Lady but there is wife of the President.
“As wife of the President, if you are good, people will love you. You will have a Non-Governmental Organisation through which you will touch people’s lives. That is why I brought Women for Change Initiative.”
Dame Patience described APC as a poison, saying: “If you drink APC, you will die.”
She noted that APC had changed name several times, adding that since her father was born, they have been around changing from one name to another.
“Very soon they would answer Ebola. The name can’t change you; it is only performance that can change you. If you like change it 100 times.
“Nigerian women, shine your eyes, don’t go for analogue, go for digital. PDP is digital, APC is analogue.”
She called on the women to pay back her husband for appointing several women into positions of authority, adding: “this is the time to say thank you so that he will do more. Those people when they were there, they said we didn’t have brains. Jonathan came and lifted us from where we were lying helplessly.”
She advised the women to collect their Permanent Voter Cards and vote massively for the president.
“PDP is not a party that tells lies. Whatever we promise to do, we do. We are not a propagandist party. Ekiti women, your mother is here and I will not tell you lies, but the truth.
“Nigerian women shine your eyes o! Vote with what you have seen, who you already know and who has performed. If anyone is telling you change, they are deceiving you.
“These were people that when they were there before Goodluck Jonathan, they did not count you women as anything. But today, PDP has wiped away our tears. Jonathan has wiped off our tears. He has fulfilled his promise of giving women 35 per cent participation. He gave 16 seats to women out of 42 slots in his cabinet. He is a performer.”
Just as Dame Patience was delivering her address women who had turned up to listen to her engaged in unruly battle to have their share of the leftover of rice which was distributed by Ekiti State Governor, Ayodele Fayose during the last Christmas. The rice was packaged in small bags.
The women were still struggling over the rice packaged in small bags when attention was diverted to another struggle for buckets presented by Senator Gbemi Saraki in commemoration of the October 16 inauguration of Fayose.
In the struggle, which almost resulted in a stampede, many of the women got injured.
Shoes, headgears, wigs and bags littered the floor while a woman was heard complaining to a friend that she lost her bangle.
Security men had a hectic time controlling the surging women who engaged in a brawl.
At the event, Governor Fayose took a swipe at former President Olusegun Obasanjo, saying that his tacit support for the APC presidential candidate, General Buhari would get him nowhere.
“After Jonathan, the North can have their own eight years. Whether they like it or not, whether that our baba, you know him, whether he tore his card or not, whether he ate the card or not, Buhari is going nowhere.
“Goodluck is our own. He is coming back. I am carrying the mandate of a people who believe in me. If they do elections here 20 times, I will win,” he boasted.