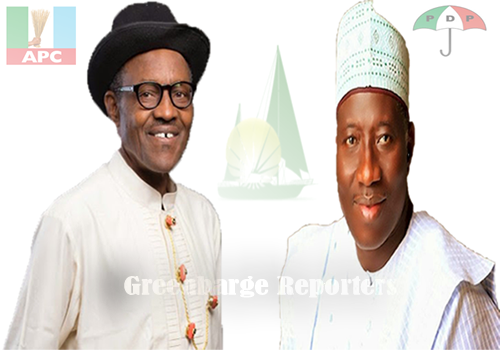 President Goodluck Jonathan who is running for second term in tomorrow’s Presidential election cross the country under the platform of Peoples Democratic Party (PDP) and his closest rival, General Muhammadu Buhari of All Progressives Congress (APC) have both arrived in Otuoke in Bayelsa state and Daura in Katsina state respectively for the election.
The President arrived Otuoke amidst tight security. He is expected to cast his vote at a polling unit near his country home.
Prior to his arrival, two Armoured Personnel Carriers (APCs) were seen on the Otuoke Road, one in front of the president’s house. The other was parked in front of Magels Resort, a hotel close to UBA, the only bank in Otuoke.
Earlier, a helicopter was seen hovering around the town, apparently on security surveillance.
Soldiers and policemen were also seen on the main road, as well as plain-clothes officers who guarded the president’s house.
There were sign posts directing motorists to “keep moving,” while police officers shouted at drivers of vehicles which stopped within the vicinity of the president’s home to leave.
The president arrived by 3pm in company of Governor Seriake Dickson and other aides.
General Buhari arrived Katsina, en route Daura, his home town, where he is also expected to cast his vote on Saturday. He arrived Katsina Airport at about 4:40p.m aboard a private Jet, Hawker 4000, with registration number ZS-Z0T.
A handful of supporters who were waiting for the former military Head of State rushed to the Aircraft as soon as it arrived at the parking area, most with their smart phones on video mode, waiting for him to alight.
General Buhari acknowledged their cheers and shook hands with some of them.
He started by greeting the APC’s governorship candidate in the state, Aminu Masari, a former Speaker of the House of Representatives.
[myad]