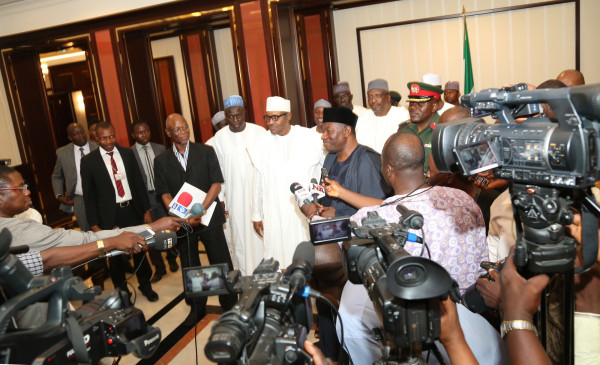 President Goodluck Jonathan today, played host to the President-elect, General Muhammadu Buhari at the Presidential Villa, with a promise to take General Buhari round the Villa at a later date.

Jonathan who spoke to newsmen shortly after a closed door meeting with General Buhari said the two of them have agreed to pick a date for the tour of the Villa, adding: “we will fix a date when the president will come and I will show him round the state house but today is not for that. Today is to continue with our conversation. So we don’t need to worry the President, we don’t need to worry the President.”

President Jonathan said that the meeting was very fruitful, saying: “You can see that we are smiling, it was a fruitful one. We are discussing for the interest of the country.”

Meanwhile, General Buhari has started operating from a government-owned complex following the allocation of the Defence House for his use. He is expected to use the facility till March 28. After his inauguration on May 29, he will relocate to Aso Rock Villa where the presidential residence is currently undergoing renovation.

General Buhari moved into the Defence House on Tuesday on his return to Abuja from Kaduna and his hometown Daura, where he stayed after the governorship election on April 11.

The Defence House in the Maitama District of the Federal Capital Territory (FCT) is one of the President’s guest houses. It is located opposite the Legacy House, which has been serving as the Peoples Democratic Party (PDP) campaign headquarters.

The President-elect hosted ECOWAS chairman and President of Ghana John Mahama on Tuesday at the Defence House before leaving for his campaign headquarters where he received delegations from Kogi and Kwara states.

He has also been receiving visitors at the All Progressives Congress (APC) headquarters.

General Buhari returned to Abuja from Kaduna on Monday and held talks with Ivorian President Alhassan Quattara at the Nnamdi Azikiwe International Airport.

A horde of security operatives have already been stationed at his new abode where visitors are screened before being allowed into the premises. This is even as the Defence House is wearing a new look.

APC Presidential Campaign Council spokesman, Mallam Garba Shehu confirmed that the president-elect had been operating from the Defence House.

“Yes, the Defence House was handed over a few days ago after its renovation.”

After he was declared winner of the presidential election on March 30, General Buhari started receiving visitors from his private residence in Asokoro area, before leaving Abuja for Daura to vote in the governorship and House of Assembly elections.

He spent one week in Daura, receiving local and international guests before leaving for Kaduna where he received another set of guests, including former President Olusegun Obasanjo. [myad]