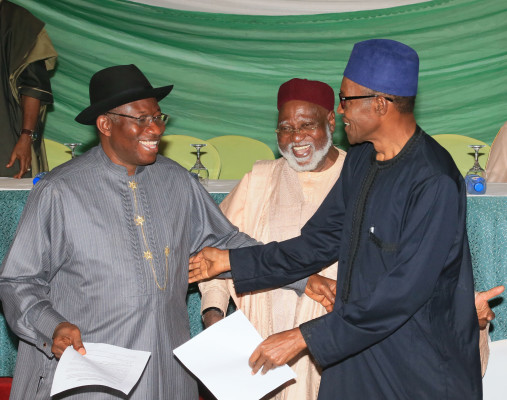 President Goodluck Jonathan has raised a hand-over and transition committee for the incoming government of General Muhammadu Buhari of All Progressives Congress (APC) government even as General Buhari has appointed the General Overseer of the Latter Rain Assembly and his erstwhile running mate, Pastor Tunde Bakare as the Head of his transition committee.

The federal government’s transition committee’s had its first meeting today to draw-up the terms of reference and guidelines to prepare for the handover briefs for the incoming government. The meeting was held at the vice presidential wing of the Presidential Villa.

Anyim Pius Anyim who briefed newsmen shortly after the closed doors meeting, said the committee met to discuss the terms of reference and develop the guidelines for preparing the handover briefs, adding that the committee adjourned to April 20 for a second meeting.

“After we have collected our own briefs from the MDAs and then we put them together, we will then interface with the other committee so that whatever clarification they want, the questions they have, then we will be able to address them.”

Anyim said that it is normal for the incoming government to also set up a transition committee, saying: “ours is to collect our own handover briefs, prepare the briefs, and prepare the President handover notes.

“The terms of reference of our own committee are to collate relevant information for the handover briefs from all the MDAs, prepare them and interface with the incoming administration’s transition committee,” the SGF explained.

Tuned Bakare who was Buhari’s running mate during  the  2011 general elections was named by General Buhari at the weekend to head his transition committee, adding that the transition committee was part of the first steps to chart an entirely new path for the country.

The Transition   committee is expected to meet with the President’s handover committee to harmonize issues before May 29. [myad]