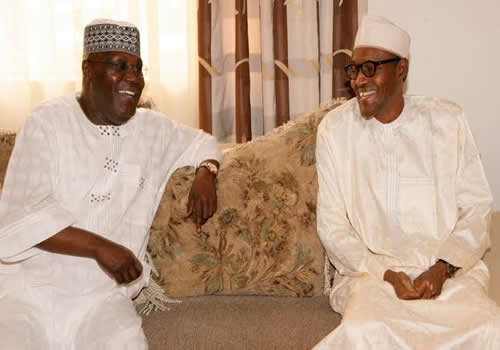 Former President Atiku Abubakar and former United Nations Secretary-General, Kofi Annan have sent a congratulatory message to the Presidential candidate of All Progressives Congress (APC), General Muhammadu Buhari, for being elected the next president of Nigeria. They also commended President Goodluck Jonathan, who contested with Buhari and lost, for his maturity and courage.
Atiku recalled that the great Nnamdi Azikiwe once wrote that “history will continue to vindicate the just.” Your victory in the polls, with votes from across the length and breadth of our country, bears witness to the acceptance of not just our party, the APC, but also your ideology of justice, fair play and zero tolerance for corruption as the bedrock for national rebirth.

“At this historic moment, it is most important to say a hearty thank you to every Nigerian who voted for the APC. Your votes have not just elected the first opposition party into federal power, but has also set a precedent which will have positive implications for democracy across Africa.

“Dear GMB, the journey has just begun. Millions of Nigerians have put their trust in you, because they were not satisfied with the status quo. You represent the hope of a new generation of Nigerians, and you cannot afford to fail them. Our party has made a promise of change to our young people, to secure and rebuild our country, create jobs and opportunity, and improve citizens’  welfare. We will stand behind you to ensure we keep those promises, just like we did during these elections.

“Our country needs a new direction. We have voted for you, and our party won the election, but when you assume our highest office, you must become the president of not just the APC, but all of Nigeria, including the people who did not vote for you. We look up to you to heal the fractures of our country, and truly unite this country like never before.

“To President Jonathan, I want to specially thank you for conducting a historic election. Your party may have lost the elections, but you have won the admiration of the world by not interfering with the wishes of Nigerians. History will be kind to you.

“It is my sincere hope that we will all come together as one country, to build the Nigeria of our dreams.
Kofi Annan wrote on his facebook wall: “The Nigerian people have spoken, and they have elected General Muhammadu Buhari. I offer him my warmest congratulations on his electoral success.

“At the same time, I wish to express great appreciation to President Goodluck Jonathan for his service to the nation and for accepting the electoral outcome in a democratic spirit.
“My congratulations go as well to Professor Attahiru Jega and the Independent National Electoral Commission for their extraordinary efforts to ensure that the elections were held in a transparent manner as well for ensuring that most Nigerians had the opportunity to cast their vote.
“My thanks extend as well as to the many thousands of poll workers, electoral observers, party agents and civil society organisations who helped to ensure that these elections succeeded despite many difficulties.
“I also commend the security services for ensuring security and calm during the electoral process.
“The Nigerian people have exercised their democratic rights. Despite the threat from Boko Haram, voters came out to cast their votes. At some polling stations, even though they were attacked, voters came back to vote.  That shows the determination of the people of Nigeria to have a say in how they are governed, and by whom.
“I hope, therefore, that the will of the people will not be marred by violence in the days ahead. I call on all Nigerians to respect the results and seek redress, if need be, through appropriate and peaceful means.
“The president elect will assume office at a difficult juncture in Nigeria’s fortunes. He will need the support of every Nigerian and the international community to steer the country through these turbulent times. To do so, he must govern as the president of all Nigerians, and avoid any “winner-takes-all” tendency, while also respecting the role of the opposition.
“I wish President-elect Buhari and the Nigerian people every success as they embark on their journey of national renewal.”
[myad]