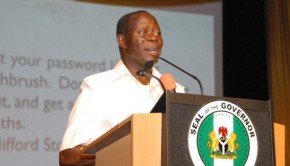 Governor Adams Oshiomhole of Edo State has said that the governors of Peoples Democratic Party (PDP) have disappointed Nigerians when they gathered in Lagos only to discussed the personality of the Presidential candidate of All Progressives Congress (APC), General Muhammadu Buhari instead of the issues that affect common people in the country.
Oshiomhole, who spoke today in Benin said that it was not in his character to join those who want to move away from the issues focusing on personality and irrelevant issues, but that the issue is about policy choices.
“It is about leadership, it is about security and wellbeing. I would have thought PDP who have addressed how they can justify a regime in which in the name of privatization, they allowed private individuals to collect money, what they call fixed charges when there is no power supply.
“That is how the real rural poor are being defrauded. Why we should trillions of naira be spent on kerosene and yet poor people instead of paying N50, PDP made them to pay N15. So even the poor are being defrauded of N100.
“Those are the issues I expect PDP Governors to address. I expect the PDP Governors to address why they inherited a currency that was exchanging at N75  to a dollar in 1999 when PDP took over Governance and that as they were in Lagos talking about Buhari’s security of tenure, that naira is now N230 to one US dollar and everything is going up.
“IMF is already saying that even this number is not sustainable that you will have to suffer more devaluation. Those are the issues we ordinary Nigerians want the ruling party to address and if indeed they have no answers to these questions, they should not worry about how long Buhari will govern, what matters is how well he will govern.”
Governors Oshiomhole regretted that the PDP showed more worry over the tenure General Buhari would make when he is elected in March 28 election, adding  “PDP Governors said many other things that do not make sense. I read one of their statements that General Buhari has signed an agreement that he is going to do only one term,  and that the North would be short-charged, that is what they claim. That is fine. That means they accept that Buhari will win the election, but they are only worried about how long he will be there for and if that should be the burden of the PDP, it tells you that they have exhausted everything.
“For me, they have accepted defeat by just saying that it is now their burden whether somebody rules for one term or not but remember that there are many great men, assuming without conceding that that is an issue.
“Mandela is celebrated round the world, American Presidents, European leaders, they all competed for space to attend his funeral. He was in office for only five years. So statesmen are not judged by how many years they occupy an office for but the impact they make in the life of a nation.”
[myad]