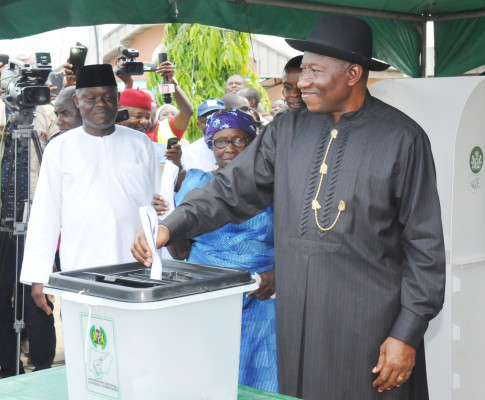 President Goodluck Jonathan has expressed optimism that the Peoples Democratic Party (PDP) will record good results in the gubernatorial and State houses of assembly elections which took place across the country today.
Fielding questions from journalists after undergoing accreditation at Ward 13, Unit 39, Otuoke, Ogbia Local Government Area of Bayelsa state, the President expressed hope that the party’s overall performance will be better than the March 28th Presidential and National Assembly elections.
“My conviction is that PDP will do well. It may probably do better in a number of states. In some states our performance will even improve. Even if you look at the last elections, our performance in some states improved. But in some states our performance was a bit low.I think that in the overall PDP will do well.”
The President arrived at his hometown of Otuoke at exactly 11am to participate in the state houses of  assembly election and was accredited by the card reader within 10 seconds.
This is contrary to the experience he had two weeks ago when several card readers in that same polling unit could not read his finger print and he had to be accredited manually after standing for an hour.
Speaking on the development, the President said: “`it is technology. There must be some minor errors and they have rectified the faults. Although I am still hearing that we have some problems of rejection but I think INEC has a way of handling their assignment. The most important thing is that elections will be conducted.”
The President gave two reasons for the low voter turnout for the election in Otuoke compared to the March 28th polls, saying the stake is usually higher for Presidential election and again, there was no governorship election in Bayelsa state at this time.
“Naturally different levels of elections elicit different interests. Presidential elections are quite interesting. Governorship elections are quite interesting. If we were to have a governorship election in Bayelsa state, the mobilization would have been higher because you need to mobilise the voters to come out.
But for State Assembly elections, the interest is not as high as the presidential elections or governorship elections.
We expect low turnout for states that don’t have governorship elections. There is no governorship elections in Bayelsa that is why the turn out may be low.
[myad]