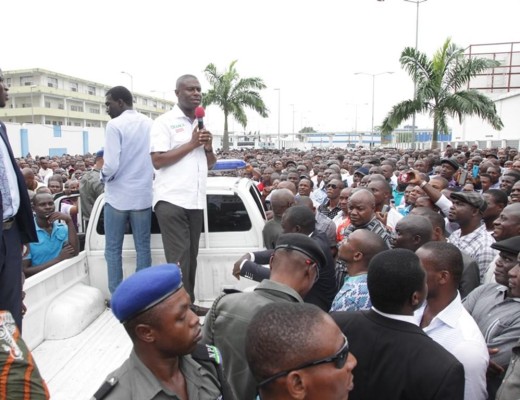 The governorship candidate of the All Progressives Congress, APC in Rivers State Dr. Dakuku Peterside, has called on the people of the state to take advantage of a new dawn created by the emergence of president-elect, General Muhammadu Buhari by voting massively for the APC.
Peterside who spoke in Port Harcourt during a campaign stop, warned that Rivers State cannot afford to play opposition politics at the centre, especially at this time because of the dire consequences.
According to him, everybody, including his opponents, agree on the futility of opposition politics because of the danger it portends for the state.
He therefore asked the people to leverage on Buhari’s victory for a greater and more prosperous Rivers State, emphasising: “as Rivers people, we are minority. Other people can find their ways around things but ours is a bit challenging. My friend, Nyesom Wike, when he was campaigning said, the last thing that can happen to Rivers State is for it to be in the party that is in opposition. I am sure many of you heard him when he said Rivers State should never be in opposition. According to him, opposition is bad because we will lose out completely in the power equation.
“Now the party in power at the centre is APC. Do we now use our own leg and walk into opposition? This is the time to align with the centre and ensure we reap maximum benefits from the centre.
“And if you put the two governorship candidates on a scale and look up to God for direction regarding choice, when you eventually make that choice, I know you will never choose PDP. “And there are many reasons why your choice will never be PDP. You know between us the person who is a tout and the person who is decent. You cannot also vote for a man who will bind you and throw you into a raging fire. So make a wise decision.
“Therefore, on Saturday go out early, make sure you are accredited and ensure you vote for APC. There is nothing more to campaign, you know what the issues are, you also know the person who will protect your interest. There is nothing more to say.
“They may give you the impression that your vote will not count, just like the Presidential and National Assembly elections but tell them it will not work this time. I promise you that this time around, from INEC office, people will monitor result sheets to the local government, ward level and to your unit.
“Nobody has written any result, nobody can write any result so come out and vote because your vote will count. Come out and vote for APC, we cannot afford to give our state to hooligans, touts and thugs. If we were looking for a tout, a man who can fight very well, we would have gone for them. But now we are looking for governor.
“A man who is competent, honest, God-fearing, that is what I will offer you. We don’t believe in rigging, we believe in law and order. They believe in killing people, we believe in protecting the people. They believe in hatred, we believe in love. They believe that by force, they can get whatever they want; we believe that by placing reason before the people, they will go with us. And as you vote for me, also remember to vote for our Assembly members.”
Meanwhile Dakuku Peterside has assured every adult of voting age of maximum protection during the April 11 gubernatorial election in the state.
He gave assurance in Abuloma during a town hall meeting that all forms of persecution, intimidation and threat to their lives to the law abiding citizens of the state will soon be a thing of the past because Nigeria has changed for the better.
He said that those who unleashed violence and mayhem on the people of Rivers State during the March 28 Presidential and National Assembly elections are already aware of a new Nigeria that abhors lawlessness and impunity.
The APC candidate therefore called on the people to come out and participate fully in the all-important process of electing the next governor of the state come Saturday April 11.
“I am sure everybody remembered what happened on March 28. They used the army, police, SSS and militants, seized result sheets and hijacked ballot boxes. They also arrested many people all to favour PDP.
“But God had a different plan. Despite the intimidation and stuffing of ballot boxes, God said it was not time for Goodluck Jonathan to continue in office. God said he wanted Buhari, can any of us challenge God?
“After that election, the spirit of Commander-in-Chief changed. Everybody now looks forward to a new Commander-in-Chief, a new person who will command the Army, Navy, Air force, SSS and Police. If anybody today calls the Army and gives instructions to intimidate innocent people, there are chances that they will not obey because if they obey, in two months time, they will answer questions.
“If anybody calls the police now to arrest you unjustly, the police will not obey because they know that there will be consequences in two months. This is so because we have a new president who will protect every Nigerian. So be rest assured that nobody can harass or intimidate you again.
“Therefore the first assurance I want to give you today is that for the election of Saturday 11 April, there will be adequate security, nobody can harass you. There will be enough soldiers, SSS and police protecting you so that you can cast your votes.” [myad]