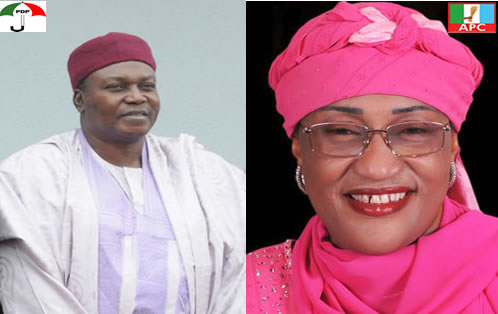 Confusion set in today as the Independent National Electoral Commission (INEC) declared the Taraba State governorship election inconclusive and proposed a re-run between the candidates of Peoples Democratic Party (PDP) and All Progressive Congress (APC) to determine the winner of the election.
As at yesterday, APC candidate, Senator Aisha Jumai Alhassan was believed to have won the election, but the returning officer for the election, Professor Kyari Muhammed later announced that the PDP candidate, Arch. Darius Ishaku won having polled 317,198 votes while the APC candidate, Senator Aisha Jummai Alhassan polled 262,386.
Announcing the election inconclusive after the final collation of the results from the 16 local government areas of the State, Professor Muhammed, who is the Vice Chancellor of Modibbo Adama University of Technology, Yola, said it has become imperative to declare the election inconclusive because the number of canceled votes is more than the difference of votes between the two leading candidates.
According to him, the total number of cancelled votes is 127,125 while the difference between the PDP and APC candidates is 54,812 votes, thereby making a re-run inevitable.
He noted that the re-run, which is to take place in the areas where elections are canceled must be held not later than 30 days before 29th May or on or before 28th April.
It would be recalled that the cancelation of the entire results of Donga local government by the returning officer due to alleged irregularities in five polling units was a subject of heated argument between the PDP agent, Rebo Usman and the returning officer.
The governorship election in the state took a violent dimension with the setting ablaze of the residences of the Secretary to the State Government, Hon. Gebon Kataps and former Deputy Speaker of the State House of Assembly, Hon. Abel Peter Diah in Gembu, Sardauna local government area.
Jalingo, the state capital also became so tensed and it took the efforts of a combined team of Soldiers and Mobile Policemen to avert a conflagration and violent clashes Sunday evening while rum ours were rife that there was a plan to attack the INEC office in Jalingo.
[myad]