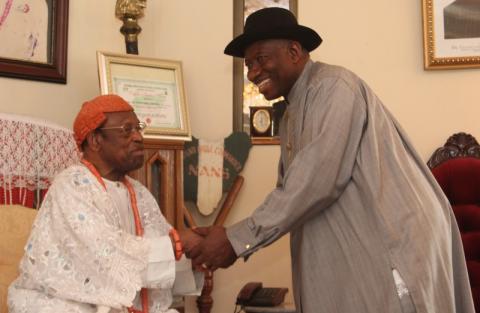 President Goodluck Jonathan has said that one of the major reason he is seeking re-election for the second term is to renew his commitment towards re-positioning the country positively amongst the comity of nations.
President Jonathan, who paid a courtesy visit on the Asagba of Asaba, Obi, Professor Chike Edozien at his palace in Asaba, Delta State today said that he will use his second term too to restore peace and security in all parts of the country.
Dr Jonathan, who was accompanied on the visit by the Governor of Delta State, Dr. Emmanuel Uduaghan and other prominent Nigerians, said that his administration has always done what is best for Nigeria.
“I want to re-assure you that as a party (PDP), we will do our best to bring peace and security to the country, and fast-track economic development in all parts of the country.”
He recalled that on assumption of office, it was discovered that of the thirty six states of the country, twelve states had no Federal University which his administration has corrected within the past four years.
“We have tarred over twenty-five thousand kilometres of the thirty six thousand  kilometres (36, 000 km) Federal Roads and we promise to complete the remaining ones and open up more arterial roads when re-elected.”
According to the President, over 90 per cent of narrow gauge rails have been completed throughout the country, even as he said that implementation of the Nigerian content law in the oil industry has improved the participation of Nigerians in the industry and the implementation of our cabotage law with Nigerians now owning ships and more Nigerians have been employed in the shipping industry.
“We also saw the need to establish Maritime University for high-powered man-power development in the Maritime Sector; we are moving the country forward.
“We are not resting on our oars in concluding the privatisation of the power sector as we believe that to improve the small and medium enterprise sector, power is very important. We believe that by next year, we would have concluded 100 per cent privatization of the power sector, it will take a life of its own with epileptic power supply becoming a thing of the past.”
The President thanked the Asagba of Asaba and other royal fathers for the support they accorded his administration, assuring that he would not disappoint them.
Earlier, Governor Uduaghan had said that President Jonathan has been delivering on his promises to Nigerians nd that Delta State is a great beneficiary of the restructuring of the power sector by Jonathan’s administration.
He said that the President was in Delta State a few weeks ago for the Presidential Campaign rally of the Peoples Democratic Party (PDP) and as a man who loves Deltans, he was in the state for another official ceremony.
The Asagba of Asaba, Obi Chike Edozien who prayed for the President, observed that President Jonathan deserves re-election to enable him in particular, implement the recommendations of the report of the National Conference which he constituted.
“We are delighted with the good work you are doing. We appreciate you and wish you the best,” the Asagba said. [myad]