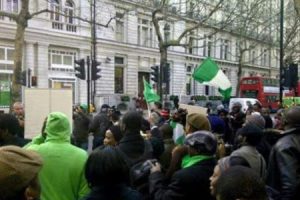 The Association of Nigerian Entrepreneur under the umbrella of Nigerians in Diaspora have condemned in its totality, attempt by those they described as “some hired foreigners” to chant anti-President Muhammadu Buhari’s songs in the United Kingdom.

Chairman of the Association, Mr. Charles E Sylvester, in a statement from London, said that the declaration by President Muhammadu Buhari to contest the 2019 Presidential election is a welcome development which a lot of Nigerians have been waiting anxiously to receive.

Sylvester, who is also the Coordinator of Buhari Diaspora Support Organisation, said the London protest was planned by corrupt politicians and the opposition to embarrass the president during his visit to the UK.

“We categorically state that they do not represent the views of majority of Nigerians in the UK, who are supporting the PMB administration to make our country greater.

“We support the president and the Vice President in their efforts to make Nigeria greater. They have been doing a good work despite various challenges and obstacles.

“We condemn the plans of corrupt politicians and the opposition to try and embarrass our president during his visit to the UK.

“The recent gathering of hired foreigners to chant anti PMB slogans is pathetic and condemnable. Nigerians in the Diaspora support president Buhari in his 2019 presidential bid.

He listed some of the PMB top 10 achievements which he said are verifiable to include; implementing reforms in the civil service which led to the elimination of over 30,000 ghost workers, thereby saving the country billions of naira monthly and massive investments in agriculture such as Anchors Borrowers Programme to improve local produce, improving fertilizer distribution and access across states through the Presidential Fertilizer Initiative. Reduction in rice imports as a result of government’s policies that have encouraged massive rice production across Nigeria.

Others are increasing external reserves to $47 billion which surpassed the ERGPs target of $30.56 billion despite global low oil prices and production challenges, the introduction of the One Primary Health Centre per ward programme of the Federal Government and effective implementation of the Treasury Single Account as well as increasing government revenue by over N3 trillion in addition to entrenching transparency and accountability.

Sylvester continued; “The establishment of MSMEs Clinics, a small Business support programme to support entrepreneurs and small businesses in different states, reforms by the Federal Government to inspire start-ups to cut unemployment as well as saw Nigeria rise 24 places on the World Bank’s Ease of Doing Business ranking, earning the country a place on the List of Top 10 Reformers in the world.

“Social Investment Programmes (SIP), N-Power Volunteer Scheme creating jobs for over 200,000 (and still counting), unemployed graduates in all the 36 states and the FCT and Government Enterprise and Empowerment (GEEP) Scheme which commenced in November 2016 in collaboration with the Bank of Industry, where soft loans ranging from N10, 000 to N100, 000 were given to over 189,000 market women and traders across different states.

“Home Grown School Feeding Programme, where almost three million school children are being fed, while tens of thousands of cooks have been engaged in their respective states and the Conditional Cash Transfer (CCT) scheme, under which about 25,000 less privileged Nigerians so far are now being funded with the monthly N5,000 stipend in 9 pilot States (Bauchi, Borno, Cross Rivers, Ekiti, Kwara, Kogi, Niger, Osun and Oyo). More beneficiaries are expected to be added in more states.