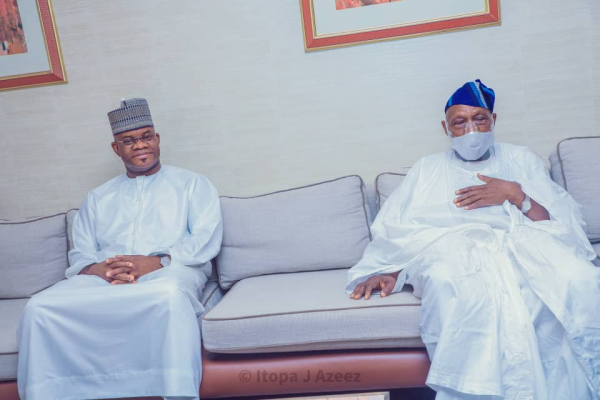 Former President Olusegun Obasanjo has paid a solidarity visit on the Kogi State Governor, Alhaji Yahaya Bello against the background of the governor’s Presidential ambition for the 2023 election, advising him (the governor) to “continue to be an advocate for youth involvement in governance.”

Ex-President Obasanjo, who had a closed-door meeting with the governor today in Abuja, according to a statement by the governor’s Chief Press Secretary, Mohammed Onogwu, advised the governor to continue to sustain his efforts in providing security in his state, realizing that Kogi is central to the nation’s peace and development.

“Former President Obasanjo noted that the fight against insecurity should have everybody on board, stressing that governors should involve everyone to ensure insecurity is curtailed in Nigeria.”

This was even as Governor Yahaya Bello appreciated Obasanjo for his statesman’s role, fatherly disposition, and wealth of wisdom which the young leaders are privileged to tap from.

He assured Obasanjo that he will not rest in the fight to ensure total safety for his people and will continue to do his best to ensure his electoral promises are fulfilled.

APC Presidency: I Have Always Been A Loner – Kogi Gov, Yahaya Bello