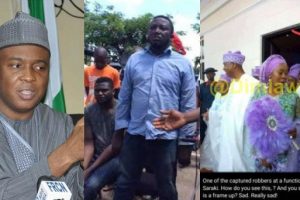 The police have come up with a photo evidence that the five suspected armed robbers who operated ruthlessly in offa, Kwara State, ever attended the wedding ceremony of the daughter of the embattled Senate President, Dr. Bukola Saraki.
In a statement today, Wednesday, the police chief spokesman, Moshood Jimoh said that that the discovery is their latest evidence that the Senate President is culpable in an armed robbery attack that led to the death of 33 persons.
“New revelations from further investigation into the matter show that all the five (5) gang leaders namely; Ayoade Akinnibosun, Ibukunle Ogunleye, Adeola Abraham, Salawudeen Azeez, Niyi Ogundiran have direct connection to the Senate President, Sen. Bukola Saraki as new pictures of one of the five (5) gang leaders when paraded by the Police early in the week was in ‘Aso Ebi’ (trouser) used during the Senate President daughter’s wedding.
“The Five (5) gang leaders further admitted that they attended the Senate President daughter’s wedding held recently,” police spokesperson, Jimoh Moshood, said in a statement.
The police authority had asked Senator Saraki to submit a written statement about what he knew of the April 5 armed robbery attack in Offa, Kwara State. The police initially summoned him for questioning after naming him as a suspect in the robbery.
The police gave Saraki 48 hours to complete a written statement, a demand the Senate President said he would meet. [myad]