Home NEWS 50 Year Old Teacher Packs Out Of Matrimonial Home Because His Wife... 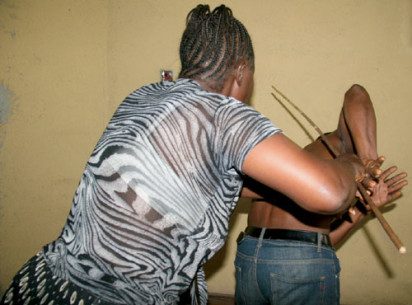 A 50 year old teacher, Musiliu Yusuf, has narrated how he packed out of his matrimonial home because his wife used to beat him at slightest provocation even as he complained that his wife has been in the habit of sleeping with neighbours.

Musilu, who was testifying in a divorce suit instituted by his wife, Hassana, said: “my wife is promiscuous; my fellow landlords are her boyfriends. She got pregnant for one of them, they mock and make jest of me whenever they see me.

“I stopped making love to her in June 2014 due to her infidelity and in 2015 she told me she was pregnant. I rejected the pregnancy and even after delivery of the baby, I refused to care for her because the baby is not mine,” the estranged husband said.

The respondent tendered the list of hotels visited by his wife and some of her lover as exhibits.

“I packed out from the house I built on four different occasions because I fear for my life as my wife always beat me on any slight provocation.

Musiliu said that contrary to his wife’s claim that they both built the house and school, he never collected any money from her.

The respondent also presented as exhibits all the title documents of the properties which were in his name.

But, his wife, 39 year old Hassana, a teacher, who filed the suit to end her 13-year-old marriage, said that her husband threatened to kill her in order to inherit what they both acquired.

“He threatened to kill me so that he can take over what we both laboured for. He always boasts that nobody will question him if he kills me.

“We jointly bought a coaster bus and two plots of land. We used a plot to build a house, the other a school.”

The petitioner said that her husband was in the habit of accusing her of infidelity.

“My husband is suspicious of my moves; every man I talk to is my boyfriend.

He has no trust, whatsoever in me,” the estranged wife said.

Hassana said that her husband packed out of their home without any notice to an unknown destination.

“On many occasions, he had abandoned me and the children. He once left the house for a year.”

The mother of four said because she refused to grant her husband loan, he rejected her fourth child.

Delivering his judgment, the President of the court, Adegboyega Omilola, said that it appeared that the estranged couple was tired of the marriage and all efforts to reconcile both parties had failed.

“Since both parties consented to the dissolution of their marriage, this court has no choice than to dissolve the marriage.

“The court pronounces the marriage between Hassana Yusuf and Musiliu Yusuf dissolved today; both parties henceforth cease to be husband and wife.

“Both are free to go their separate ways without any hindrances and molestation,” Omilola ruled. (NAN). [myad]

Second Lockdown In Lagos, Thanks To EndSARS Protests