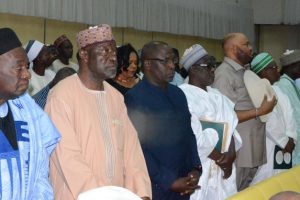 The forum, in its reaction to a communiqué issued by Afenifere, Ohaneze, Northern Elders Forum and Pan-Niger Delta Forum, called on leadership of the socio-cultural groups to mention some achievements of President Buhari-led administration while pointing out the shortcomings.

The Secretary-General of the Yoruba Ronu Leadership Forum, Mr Akin Malaolu, in a statement today, Saturday in Abuja, said that although there are growing concerns about killings and insurgency in some parts of the country, efforts made by the present administration to contain the situation was worth mentioning.

“For leaders of the groups to be united in passing jaundiced judgments on the administration of the All Progressives Congress is unfair.

“It shows lack of accuracy in measuring achievements of Buhari and his team at this material time in our national history.

“Such statement is least expected at a time when security agencies are recording successes in arrest of masterminds of mindless killings and abductions across the country, including the Chibok school girls.

“Military and other security agencies need to be encouraged for such performance by any patriotic group, not condemned in a ploy to spite the Federal Government.

“Cry of incompetence, high unemployment rate as claimed by the groups show the absence of accuracy and wisdom in their measurement of the nation’s recent achievements.”