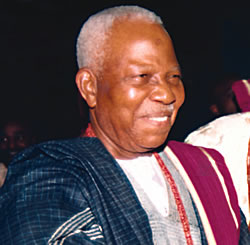 Pan sociopolitical organization, Afenifere, has called on the Federal Government to abolish nomadic system of cattle rearing in Yorubaland in order to stop the criminality allegedly being perpetrated by Fulani herdsmen in the rural communities of Yorubaland.

This was contained in a communiqué today at the end of the monthly meeting of the organization at the residence of its leader, Pa Rueben Fasonranti, in Akure, the Ondo State capital.

In the communique read by the Publicity Secretary of the group, Mr. Yinka Odumakin, Afenifere decried the state of insecurity in the country, particularly, the recent kidnapping of a former Secretary to the Government of the Federation, Chief Olu Falae, last week.

Describing the kidnap of Falae as shameful, insensitive and disrespect to the Yoruba race, the group warned that if the Federal Government failed to stop the herdsmen from attacking the Yoruba people, the people of the South-West might have to defend themselves.

“Our people are everywhere in the country and they don’t destroy the business of their hosts. Why should the Fulani people be destroying our own business? Our demand is that the Federal Government should arrest the perpetrators and prosecute them. Youruba people will not tolerate this any longer.

“So, while we await the arrest of the criminals, cattle rearing should be stopped in Yorubaland. I read Chief Olu Falae told the Commissioner of Police that government should do something urgently to stop this thing because if such a thing is not done, it will be encouraging self-help; people will defend themselves. And we agree totally with him.”

Afenifere asked the President to implement the recommendations of the report of the 2014 National Conference which it said contained the abolition of nomadic system of cattle rearing. It described cattle rearing as  primitive, and asked the government should rather adopt ranching cattle rearing system.

“The meeting noted that in 2014 National Conference, to which Chief Olu Falae led the Yoruba delegation, extensively discussed this matter of nomadic cattle rearing and the Conference resolved that  it should be stopped and instead have ranches for cattle business.” [myad]