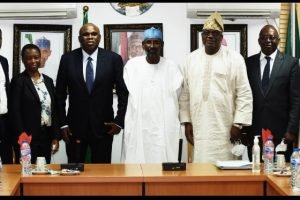 The African Export Import Bank, (Afreximbank), a pan-African multilateral trade finance institution with headquarters in Cairo, Egypt has promii to build an African Medical Center of Excellence in Abuja.
This was made known today, July 2, when a delegation of the bank, led by its President and Chairman, Board of Directors, Professor Benedict O. Oramah, visited the Federal Capital Territory Administration.
Professor Benedict Oramah said that the bank’s team was in the FCTA to brief the Minister on the progress made on the construction of the African Medical Center of Excellence and the African Trade Center in Abuja.
He commended the FCT Minister for the tremendous support the bank has enjoyed from the FCTA, especially as it begins to implement some of its initiatives in Nigeria that are based in Abuja.
The Bank’s Director, Export Development and Ag. Director Project and Asset Based Finance, Oluranti Doherty said that the bank is working closely with leading international medical, human resource and construction consultants and expressed optimism that the ground breaking ceremony will be carried out by November of 2021.
Responding, the minister, Malam Muhammad Musa Bello, expressed excitement about the project and said that establishment of the Medical Centre in Abuja will not only attract people seeking medical attention within the African continent to the Center, but also reduce medical tourism from Nigeria.
Malam Muhammad Musa Bello commended Afreximbank for its various projects and investments in the FCT, saying: “We feel highly honoured with your tangible presence in respect of the projects you are doing here and we look forward to your investments either directly or as an enabler because as you know, Abuja itself is a city that started from scratch and it’s a work in progress. So, we want enablers like you.”
The Minister advised the bank to support the FCT Administration in the provision of infrastructure, especially in the proposed location of the Medical Centre of Excellence as well as the powering of street and traffic lights within the city.
The Minister said that Nigerian laws made provisions for the eligible customer that consumes electricity in excess of 2 megawatts to independently source for electricity.
He said that the FCT could explore this possibility with support from the bank.
“The law in Nigeria now allows for what we call Eligible Customer. Once your consumption is up to two megawatts and obviously the consumption of the city is far above two megawatts, that allows us to create a solution that is off grid, and then of course, we look at renewable options.”
The minister had in May last year, presented the Certificate of Occupancy of the land for the African Medical Center of Excellence to be situated in the proposed Abuja Medical City Development Project, to Mr. Abdoulaye Kone, Afreximbank’s Regional Chief Operating Officer, Anglophone West Africa.