Home NEWS Against Tradition, Nnamdi Kanu Absent At Burial Of Parents In Abia 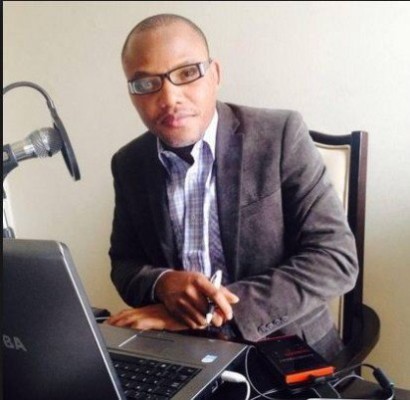 The leader of the proscribed Indigenous People of Biafra (IPOB), Nnamdi Kanu was absent at the burial ceremony of his parents, Eze Israel Okwu Kanu and Ugoeze Sally Kanu today, February 14.
The burial was held at Isiama Afaraukwu community in Umuahia North local government area of Abia State.
Nnamdi Kanu was supposed to have taken charge of burial ceremony as the first son, according to the customs and traditions of the community, but the fear of being arrested by the security operatives after being declared wanted by the federal government may have prevented him from being present at the burial ceremony.
Some IPOB members said that they would have been happier if their leader was able to attend the parents burial.
However, Kanu’s younger brothers; Prince Emmanuel and Kanuta were in attendance.
Also in attendance were the Senate Miniority leader, Senator Enyinnaya Abaribe, Senator Victor Umeh, former National Chairman of All Progressives Grand Alliance (APGA), former Anambra State  and Atiku Abubakar’s vice Presidential candidate in the 2019 election, Peter Obi, former Speaker Abia State House of Assembly and onetime Umuahia/Ikwuano federal House of Representatives member, Rt. Hon.  Stanley Ohajuruka, l Chief Tony Ukasoanya; Abia State PDP pioneer chairman, Chief Empire Kanu and among others.
There was no presence of military personnel around the Isiama Afaraukwu community, though there was deployment of Police personnel at different entrance and exit routes of the community in an apparent move to forestall any breakdown of law and order.