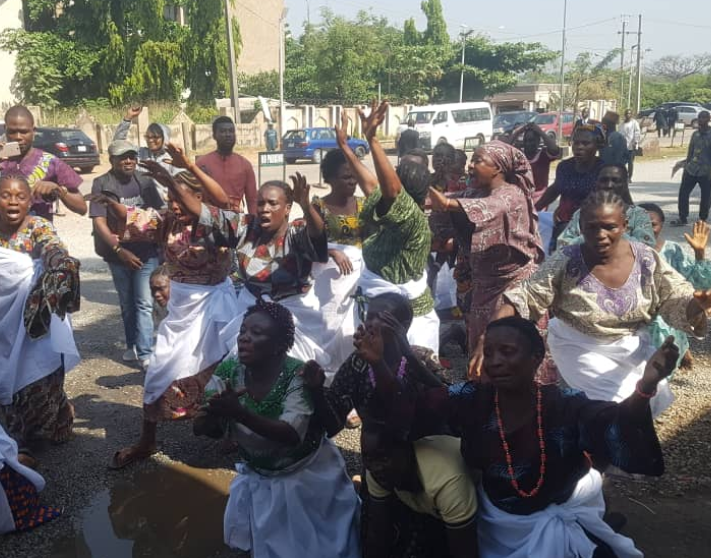 A group of half-naked women from the birthplace of Omoyele Sowore, in Kiribo, Ese-Odo Local Government Area of Ondo State, staged a demonstration today,  December 5 at the Federal High Court in Abuja to protest the continued detention of their son by the Department of State Service (DSS).

Most of the women numbering about 30 were decked in white wrappers and bra but with no clothes covering the rest of the upper parts of their bodies.

In their Apoi dialect, the women, many of them with grey hair, described themselves as beneficiaries of Sowore philanthropic gestures and appealed to President Muhammadu Buhari to release their son from custody.

The protesting women who arrived in the court environment after the proceedings started were not allowed entry into the court premises.

But they stayed by the gate brandishing their placards with various inscriptions calling for Sowore’s release and only departed long after the proceedings had ended and Sowore with his co-detainee returned to custody by the DSS operatives.

Sowore and his co-detainee, Adebayo Bakare, were produced in court today with the judge, Justice Ijeoma Ojukwu, ordering the DSS to release them from the illegal detention within 24 hours.

Their trial on charges of treasonable felony was scheduled to commence today but the court had to adjourn to tomorrow, December 6 due to report of none compliance with the fresh order for the defendants’ release.